How to Beat Eternal Haven Part 2

Last time I talked about cards that counter acted Eternal Haven I just touched on the pretty obvious ones. They were Stormspark Blast, Squillace Scourge, Queen Kalima, Ensnare, and Devouring Smog. For this second part I am going to focus are cards that are great against the Light Monarch and do not see that much play. It is important for us when building decks to try to think outside the box and try using cards that others do not. Just because no one else uses them does not mean they are bad. Let’s take a look at these underrated cards and maybe you can come up with a new deck!

This has always been one of my favorite cards in the game. He pretty much gives any of your creatures the ability to slay an untapped creature. In my opinion, he is the best battle mage from Clash of the Duel Masters. He is best used to combo with cards that 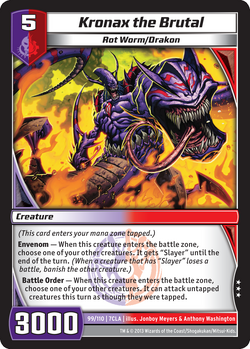 have an ability that says “when this creature attacks…” by using it with those creatures, you will get the most bang for your buck. I always run Gigastand with Kronax that way they lose a creature and they are forced to discard a card from their hand at the same time. He is especially good against Eternal Haven because it turns any of your creatures into an Anti-Haven banishing machine since his ability does not target your opponent’s creature but yours instead. The reason he does not see that much play is because the lack of good fire cards there are in the game. Almost all the decent fire cards are all focused around dragons or some form of red rush deck. There are very few fire control cards, which is a shame because I think the deck has a lot of potential.

One of my favorite Skyforce Champions is Azuri. He is a Stormspark Blast on legs and has 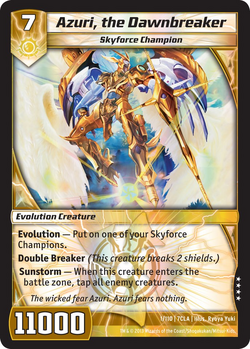 a huge power to boot. The 11000 power for the cost of only 7 mana is a great balance. He can almost attack over any creature when he comes out. The reason why he is good against Eternal Haven is the same reason Squillace Scourge is, you build up your field with a lot of creatures and then you can play him and his ability does not target just like Stormspark Blast, and then you can feel free to attack with all your creatures and not have to worry about Eternal Haven stopping you. His only drawback, which is a big deal to some people, he is a Skyforce Champion Evolution. It is hard to use Evolutions off Skyforce Champions because they cost so much mana to play, but you should not be focused on playing this guy as fast as possible. This is a card you sit back and wait until the right time to play, most the time when you are going in for game or to wipe out your opponent’s board. With the right Skyforce Champion deck this guy will be a threat to deal with.

This card has seen some competitive play, but not much outside of Queen Kalima decks 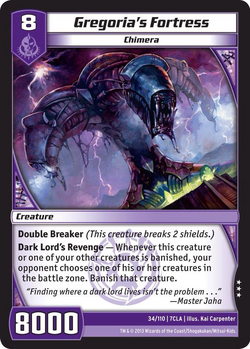 . He is not a direct out to Eternal Haven but he gives you some options and is all around a great card. You can use him in many ways and force your opponent to make some tough choices when it comes to banishing their creatures and if you are able to get out 2 or 3 in your battle zone then your opponent is in a lot of trouble. The main reason I like him is because you can use all your little creatures to get rid of your opponent’s big ones. Normally you are going to need a tapping card like Stormspark Blast or Azuri, the Dawnbreaker, unless your opponent is aggressive. The most obvious card you can use to abuse Fortress’ ability is Ripper Reaper. If you play Ripper Reaper while having Fortress out, then your opponent will have to banish two creatures due to both of their abilities. To me this card should be called Anti-Monarch card because it counters every monarch in the game expect for King Tritonus. This is just a great card and I hope it will see more play in the future.

There is a guy at my local Deul Day and no matter what deck he uses, he always seems to 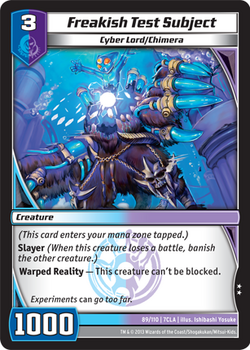 play with this card. It is great how simple and powerful this card truly is. Now with Protectors coming out in Invasion Earth I am not quite sure how relevant this card will be since it cannot get past that ability, but for all purposes right now it is good. You are able to banish any tapped creature with this card. Normally Haven can be hard to deal with because they play the free blocker with her ability most of the time and Test Subject gets right around that. It being a Cyberlord/Chimera is neat as well because it fits right into a Blurple deck. Blurple has turned itself into a rush type deck but there are ways to build it into a control deck and it still be just as deadly, if not more so. This card also works great with Kronax and Gregoria’s Fortress. If you have not noticed many of these cards work very well with each other.

I hope looking at these “Underrated” cards gave you a new perspective on how to defeat Eternal Haven. It is scary when staring down a Triple Breaking, 15500 Blocker, that cannot be targeted by your spells and abilities, but just realize there are outs to it and it can be stopped. The answer is not always just try to rush your opponent hoping you can win before they can play it. There are ways to out control your opponent into your victory. It is okay to play different decks than everyone else. It always good to try new things, that is how a game grows. It gets boring playing the same deck over and over. That is why I always try to use a different deck in every tournament I play in and I would encourage you to do the same.

The Circuit is coming to Worcester, MA on November 17. See you on the other side of the veil!

Double KMC Report: Techs and Successes
Breaking Away From The Meta: Mono-Darkness Kalima
Our Contributors