Leveling Up! Tips to Becoming a Better Player

You are here: Home / Leveling Up! Tips to Becoming a Better Player
Categories: Cardfight Vanguard
by Philip Lai

Hello everybody! My name is Philip Lai; the publicly proclaimed "Dragon Master" of Toronto, Canada. I've been playing Cardfight!! Vanguard since the initial English release of the game, and have been playing actively in the community ever since. From playing Vortex Dragon to Vermillion and finally to DoTE, my expertise regarding dragon decks is second to none, and I'm happy to be able to share my knowledge with you all.

Through my past years of playing vanguard, I've noticed a trend of players who strictly believe that vanguard is solely reliant on luck, and that their wins and losses depend only on the amount of lucky charms they had for breakfast.  However, if you've been playing for long enough at local tournaments and events, you'll come to notice that those players are usually at the bottom of the tournaments standings. On the other hand, a select few players are always on the top and winning tournaments non-stop. So then if that's the case, how many bowls of lucky charms do you need to eat before you become one of those few top players? Simply none, because unlike my past article regarding Flame of Hope, Aermo, I'll be talking about a very different topic today, which is about how to improve as a Cardfight!! Vanguard player. Have you ever wondered why you kept losing to that one person at your locals? Well, lucky charms has nothing to do with it. 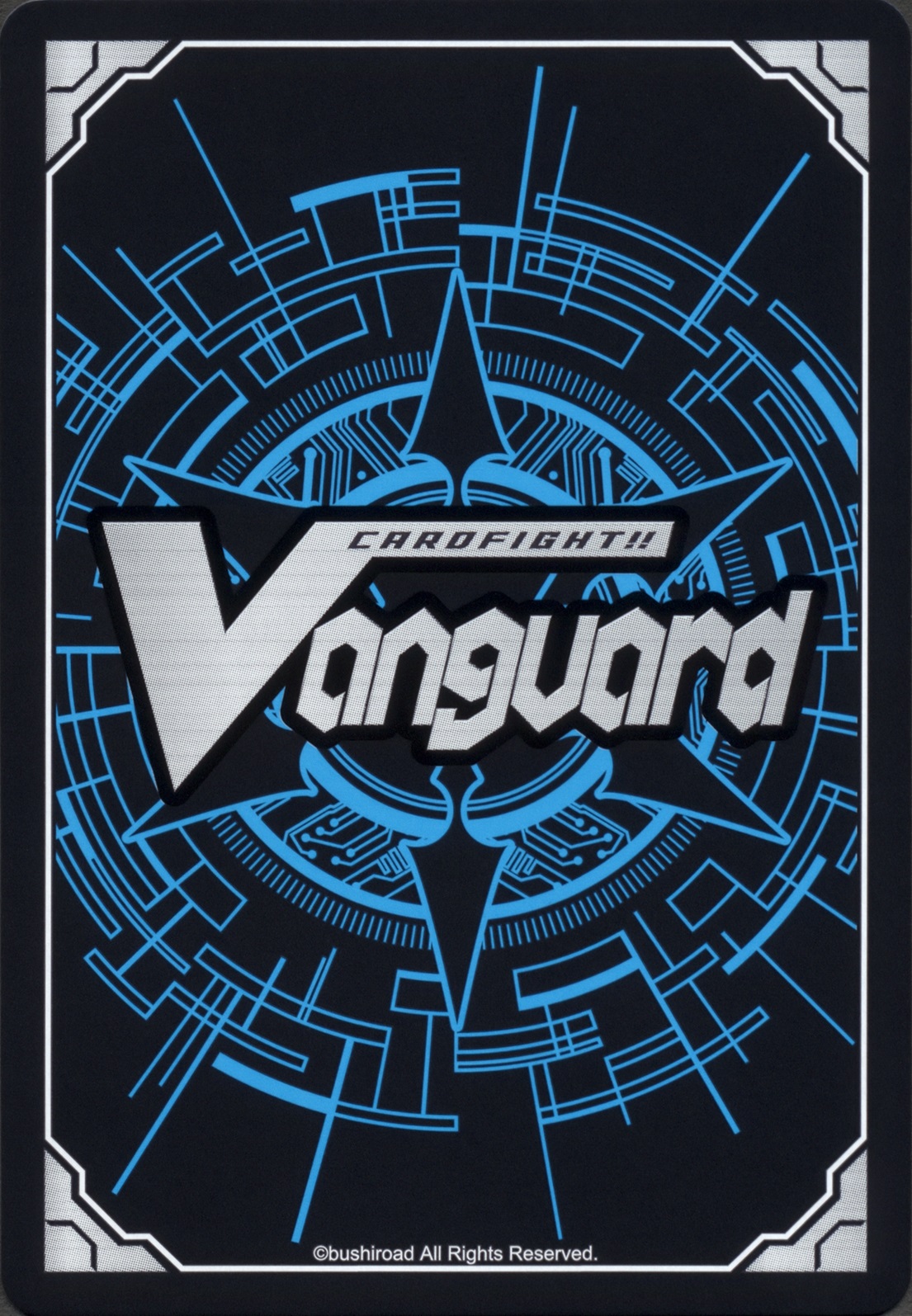 The first thing you need to get out of your mind is that you're the best player at the game at your highest potential. If you were, there would be no point of even reading this article because your win rate would be 99% and hold the title as the best vanguard player in the solar system.  You also need to understand that vanguard isn't a 90% luck game. In fact, the luck factor in vanguard is equivalent to those in other card games, but simply more visible since you can see triggers flying around. Understanding that there's always room for improvement is the first step in becoming a better vanguard fighter. The next step is learning how to improve your game, which is what I'm here to help do through a series of examples and story morals.

I've come up with the three biggest factors in which people need to improve on to become better players, so enough random junk for you guys to read; here comes the important stuff!

I have a friend of mine who would consistently made critical mistakes due to being unfamiliar with key vanguard concepts and simple game theory. He then asked me why he does so poorly in tournaments, and I flat out told him that he was making mistakes everywhere and that he should take a step back and think about how he's playing. After that, he started to pinpoint his in-game mistakes and understand concepts such as why certain attacking patterns are more effective than others. Since then, his gameplay has improved a lot and has become a force to be reckoned with.

In short, you should think back on your plays once in a while. Whenever you lose a game, ask yourself questions like "what did i do wrong?" and "what could i do differently next time?". Little errors like guarding unnecessary attacks or attacking the wrong units can quickly lead to a unfavorable situations that can cost you the game. Devoting yourself to pinpointing mistakes and misplays can lead to fewer of those future mistakes, and overall improving yourself as a player.

I'm sure everbody remembers their first time playing against Majesty Lord Blaster, and how they found themselves at 4 damage before even riding to grade 3. At first, nobody could deal with this overwhelming power and had no real understanding of the deck, but over time, many players developed strategies to fend off and counter MLB as a whole. Players started to exploit the deck's weakness and turn it against their opponents so effectively that after a month after it's initial release, some players no longer believed that MLB was considered a top-tier deck. 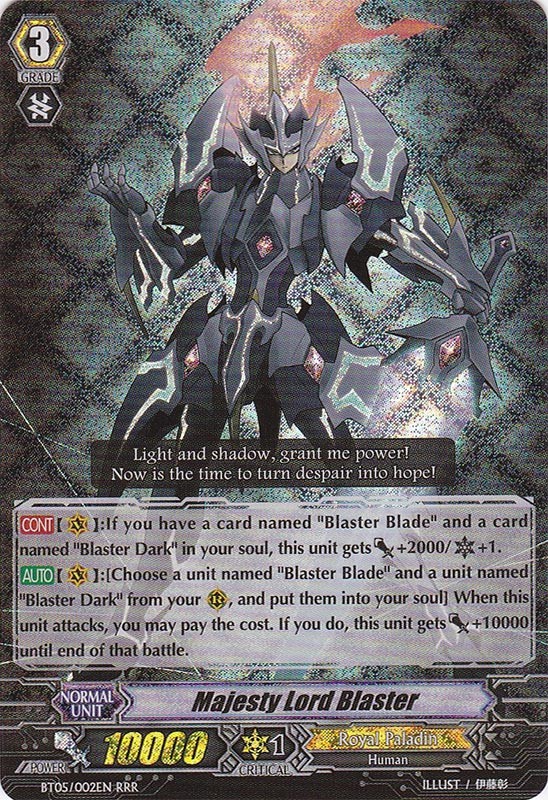 Majesty Lord Blaster and Phantom Blaster Overlord are two of the decks which had their weaknesses exploited fairly quickly within the vanguard community (MLB's suck-in effect is a -2 which has huge mid-game flaws and PBO's persona blast is costly and can be perfect guarded easily). This is due to the fact that they were considered to be "the big three" at the time alongside DoTE, and that everybody was analyzing the decks for weaknesses and quickly developed strategies on how to handle possible unfavorable situations through theoretical work and play testing. Every deck has strengths and weaknesses, and with a bit of time, you can look over the decks that you tend to lose to the most and learn ways to deal with them (or you can just ask around). Some weaknesses will be obvious while some will be fairly hidden, but in the end, they're weaknesses just waiting to be discovered.

Building a deck has always been fairly simple and straightforward, but after playing around with it for a while, you might run into some issues or things you could improve on. A card that you expected to be great may have not been as great as you think, or your deck strategy tends to be inconsistent at times. At times like this, it's a good idea to look over your deck and consider what you could change to improve your deck. Overall, when you're changing your deck, or building a whole new one from scratch, you should always keep the following things in mind:

After building a deck, feel free to play test as much as you'd like to see how your new and improved deck works. It's possible that you may have to go back to the drawing board and fix it up again, but that's okay! It means that you're on the right track and slowly improving your deck. A good deck doesn't grow on trees, you know.

Becoming a better player isn't a walk in the park, but it's nowhere near impossible either. All you really have to do is set your mind to it, and think outside the box here and there. Just because the guy beside you is nagging about how great his DoTE deck is doesn't mean that it's unbeatable. In fact, when you figure out his weakness and outplay him with your trusty Granblue deck, he'll be walking the plank with a mouthful of salt. Even though I'm known for playing DoTE in my community, I've actually been playing Crimson Impact, Metatron for the past two months. Also, I was much more comfortable playing Metatron than Dote, simply because most players didn't know the Metatron matchup, while all of them knew the DoTE one very well.

Anyways, to wrap things up, the moral of the story is that you can become a better vanguard player with a little bit of hard work, determination, and sweat. Understanding what you need to know and what you need to improve on are key aspects in helping you become a better player. Also, remember that vanguard's supposed to be fun, so don't get frustrated! Breaks are good for the brain and body.

-Best of luck to you all!
Philip Lai