Lions, Tigers, Elephants, and – Hey Where are the Bears? A Look at Great Nature

You are here: Home / Lions, Tigers, Elephants, and - Hey Where are the Bears? A Look at Great Nature
Categories: Cardfight Vanguard
by Chad Walsh What's up, Card fighters? You may not remember me, but many name is Chad. I wrote an article for the contest a month or so ago. Today I wanted to discuss a new deck I picked up fairly recently, the Great Nature clan. Now as many people know (or don't know), there are a few different variants such as The Guardian of Truth, Lox variant which focuses on the ride chain. Also, there is the Leo-Pald variant which focuses on getting out School Hunter, Leo-Pald as fast as possible and using his skill and limit break. So without further adieu, let's begin with the variant that I'm currently using, the Lox build.

Explanation of the Lox Variant

As you can see, the deck seems fairly standard, however,  I feel that draw is better for this variant so that you can get to your combo pieces better such as your ride chains and perfect guards. Also, I'm running a single copy of Leo-Pald and three copies of Binoculus tiger in this build even though they work somewhat better in their own build, because they still work really well with this variant and still have a lot of synergy with it.  Basically the main idea is to power up your units through different skills, mainly through Gaurdian of Truth, Lox, and Leo-Pald's skills work really well here as well. As you ride each lox, they gain a power boost as long as you have the previous grade in the soul. Magnet Crocodile's skill works very well with both variants because it gains 2000 power for having a Great Nature Vanguard, which this skill works well with Leo-Pald's and Guardian of Truth, Lox's skills becase they both give power and sometimes an extra critical. Before I move on, I would like to explain to you readers how the Gaurdian of Truth, Lox works.

Skills: CONT【V】: If you have a card named "Law Official, Lox" in your soul, this unit gets Power +1000.
ACT【V】: [Counter Blast (2) & Choose a card named "Guardian of Truth, Lox" from your hand, and discard it] Choose one of your «Great Nature» rear-guards, and that unit gets Power +4000/Critical +1 until end of turn, and at the beginning of your end phase, retire that unit.

As I already explained, the first skill allows him to gain 1,000 power if you have the grade 2 in the soul. His second skill is a     persona blast, hopefully you remember what that is from my last article, and this persona blast allows you to discard another copy of himself to give a rearguard an extra 4000 power and a critical. Hey remember our friend magnet Crocoddile, he's Lox's best friend. The unit retires in the end phase. Next up we look at the Leo-Pald variant is probably quite a bit more expensive and extensive than this variant because there is a lot of versatility in that variant.

Next Up- The School Hunter Leo-Pald Variant

Explanation of the Leo-Pald Build

Before we get to the explanation, let's take a quick look at School Hunter, Leo-Pald. 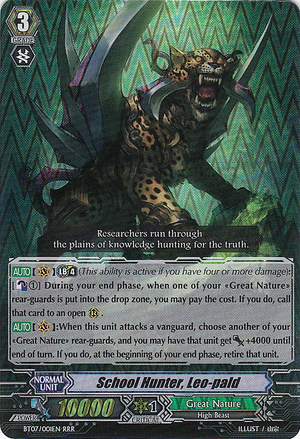 AUTO](VC) Limit Break 4 (This ability is active if you have four or more damage):[Counter Blast (1)] During your end phase, when one of your «Great Nature» rear-guards is put into the drop zone, you may pay the cost. If you do, call that card to an open (RC).
[AUTO](VC):When this unit attacks a vanguard, choose another of your «Great Nature» rear-guards, and you may have that unit get [Power]+4000 until end of turn. If you do, at the beginning of your end phase, retire that unit.

So far, Leo-Pald is one of the only grade 3's with  limit break that I know of that cme out in booster pack 7. anyway, now to explain his skills.