Being able to make accurate reads on your opponent’s facedown cards is arguably one of the most important skills in Yugioh, but lots of players still cannot do it. With that said, today I'll discuss the best ways to make these reads.

You soul charge for 4 monsters (just as an example, let’s say Tempest, Tidal, and two Fire Hands) and your opponent has 3 backrow. He says that the summons are fine: right off the bat you've eliminated 2 trap cards, Bottomless Trap Hole and Torrential Tribute. Do not play around these cards from this point on. Solemn Warning is also likely eliminated. If your opponent has 1 monster then they wouldn’t be afraid to set Torrential Tribute, and there would be no reason to hold Bottomless in their hand. Now with Tempest and Tidal you overlay into Dracossack. Your opponent says it's fine. Now you've eliminated Compulsory Evacuation device. You use the effect of Dracossack and your opponent responds with Traptrix Trap Hole Nightmare. Now you overlay your two Fire Hands into Lavalval Chain. Your opponent takes some time to think then allows it to go through, but you already know that he is bluffing because you've eliminated most of his realistic options and the only thing left is a Book of Moon, which he’d have used on the summon. You use effect of Lavalval Chain and your opponent has no response, so you send a Blaster to the graveyard. Now you've just eliminated all effect-response traps, like Breakthrough Skill, Fiendish Chain, and Traptrix Trap Hole Nightmare. So what cards could it be?

You haven’t activated any trap cards or attacked yet. So now you've narrowed the 2 remaining cards down to attack-response cards such as Dimensional Prison (or Mirror Force, but this is less likely based on the current meta, which is always an important consideration), spell/trap hate such as Wiretap or Mystical Space Typhoon, or a bluff card. You special summon Tempest by banishing Blaster and Dracossack, search Flamvell Guard and summon it, then synchro summon Scrap Dragon. Then you set the Soul Charge that you were going to set regardless (given that you can put over 8000 points of damage on board next turn) and if they don't respond to you setting the card, you've just eliminated Mystical Space Typhoon. If they do Mystical Space Typhoon your newly set card, you should use Scrap Dragon to destroy the Lavalval Chain and your opponent’s last backrow as you have already gotten value from Lavalval Chain. But let's say your opponent doesn't flip Mystical Space Typhoon - if your opponent doesn't use Book of Moon it tells you that your opponent has no real cards apart from the possibility of attack-response traps. Now, no matter how many cards your opponent sets on their next turn, the odds are only one of those cards would be a real trap card and that would be the card they drew for their turn. Keep in mind making Scrap Dragon to force your opponent’s backrow shouldn’t be done against Artifact variants as it’s difficult if not impossible to distinguish between bluffs, attack-response traps, and set Moralltachs. Stardust is usually a better option.

This technique is predominantly useful against decks that can search trap cards, like HAT, Mermails, and even Spellbooks. Let's say that you’re in round 6 out of 8 for your regional and you've been playing for over 7 hours. Your opponent summons Myrmeleo and adds Bottomless Trap Hole to their hand. When they hand you their deck to cut, watch their hand while cutting - if you're careful and your opponent isn’t you may be able to follow the searched card. If you have a Mystical Space Typhoon, this takes a lot of guessing out of the equation. This will happen more often towards the later rounds when people get tired. 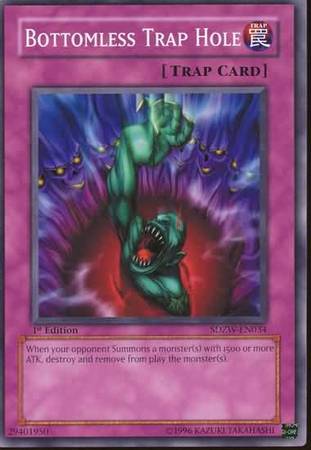 When your opponent literally hands you information

For this situation, let’s assume that you’re using Infernity. You went first with a weak loop and an ending field of Infernity Necromancer, Infernity archfiend, a searched Infernity Barrier, and 2 mystery backrow. Your opponent sets 2 cards to their backrow and passes. You draw something irrelevant, attack with Archfiend, and pass. Your opponent activates Onslaught of the Fire Kings. Just by activating that, you know that there’s almost certainly a second Onslaught in their hand – otherwise they would have tried to bait Barrier with another card that would take Archfiend off the field. You can also eliminate Book of Moon as a card in their hand otherwise they would put Infernity Archfiend facedown to make Infernity Barrier useless.

How do I know what cards to play around?

I've heard that question tossed around way too much now. Most control decks will use a large quantity of traps and even non control decks probably use the "four one-ofs" Compulsory Evacuation Device, Solemn Warning, Torrential Tribute, and Bottomless trap hole because of how powerful they are so you can expect to see these four cards in most decks you play against. Let's say you saw your opponent summon Traptrix Myrmeleo so you can assume they're using at least two "Trap Hole" cards (One of which is more than likely Bottomless Trap Hole and in the Current Metagame the other is likely to be Traptrix Trap Hole Nightmare). So be careful with using monster effects of monsters that were special summoned this turn as you may lose them!

Let's say game 1 you attacked with a monster directly and your opponent flips up a mirror force and destroys three of your monsters. You can tell that he is quite satisfied with the mirror force. Now you know to be very careful with having your monsters in attack position during game 2 and possibly a game 3 because you're aware that your opponents deck does contain mirror force. 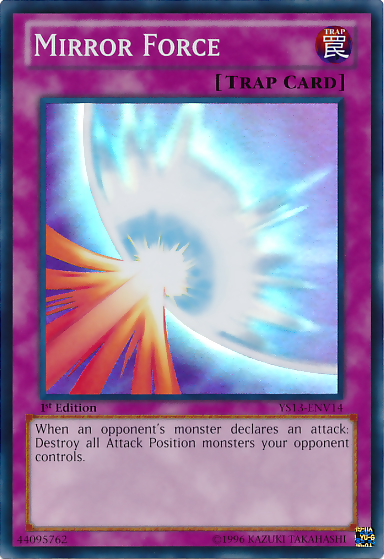 The above scenarios are very specific examples. Things will not always fall into place this perfectly. Remember that some cards are run in multiples and calculate the odds accordingly. Much of this information is conditional on your opponent’s skill level! Players at the top of their game will often make seemingly bad plays such as holding Bottomless Trap Hole when their opponent summons a Dragon Ruler, only to flip it after a Soul Charge. Less skilled players may also play trap cards that are suboptimal for the current format, such as Mirror Force. Keep in mind both head-games and the trap line-up itself when making reads.

That's it for this week’s article! The Circuit series is this weekend in Providence, Rhode Island on August 9-10th, for more information, click this link: http://articles.alterealitygames.com/event/circuit-series-providence-ri-august-9-10-2014/