It's unanimous: the wait for Shattered Alliances is painful.

Wizards of the Coast just announced dates and locations for the much-anticipated second season of Kaijudo Master Challenges. Everyone in the community is juiced up and ready to tackle these events head-on, but there's one problem: the tournaments don't start until after Shattered Alliances is released, and the set doesn't come out until September 13!

We're all absorbing data in the aftermath of the Kaijudo Championship, but we can't put those lessons learned to the test since the metagame will invariably shift yet again.

We're free to plan day trips to the KMCs, but that's it. No one actually knows what deck they'll be using.

In the context of playtesting, one could say that playing Kaijudo between now and the set being released is pointless. Me? I can't get behind that assertion. One of the best parts of Kaijudo is the fluidity of the metagame, and how smart deckbuilders are rewarded for identifying trends before the rest of the field. Sure, certain cards in Shattered Alliances may turn out to be format warpers a la [ccProd]Keeper of Laws[/ccProd], but that doesn't completely invalidate the desire to test out existing cards that are maligned or under-appreciated. Players who fancy themselves deckbuilders just can't help but brew up new lists. It's a sickness.

The cards featured in this installment of Portal Tech will either make you jet off to scour through your longboxes, or scoff at their very mention. Let's jump right into it! 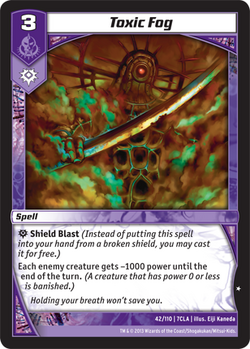 Fellow ARG columnist and Kaijudo Champion Bobby Brake turned some heads with his 3-color Leviathan control deck sporting [ccProd]Toxic Fog[/ccProd]. I, like many, tossed this card to the side when I first encountered it and never gave it a second thought. I didn't even remember exactly what it did when I saw Bobby playing it; I knew my initial impression was negative, though. Even after reading the card, I couldn't quite get onboard, but who am I to argue with Bobby's results? He might be on to something here.

-1000 power to your opponent's team is a pretty underwhelming effect, and the fact that it's a shield blast does little to elevate its value against the top decks in the meta. It has obvious applications against rush strategies, but I'm on record as saying [ccProd]Barrage[/ccProd] is an awful card right now, and a shield blasted [ccProd]Toxic Fog[/ccProd] is even less impressive. Against Drakons, there's a fair number of creatures you can one-shot with it ([ccProd]Blaze Belcher[/ccProd], [ccProd]Jet-Thrust Darter[/ccProd], [ccProd]Flame Spinner[/ccProd]), but the break needs to happen in your first couple shields for it to matter.

What I overlooked, though, is the thing that makes this card a viable piece of tech: you can actually cast it.

Against the aggressive decks, you just need to be able to spend your mana on something in the opening turns, and [ccProd]Toxic Fog[/ccProd] fits the bill nicely. It's not "shields or bust" like [ccProd]Barrage[/ccProd] and [ccProd]Dragons Breath[/ccProd]; 1-for-1ing a [ccProd]Blaze Belcher[/ccProd] is perfectly acceptable when you're trying to hold on for dear life. That also extends to the Enforcer rush matchup, albeit to a lesser extent ([ccProd]Magris the Magnetizer[/ccProd] and [ccProd]Shimmerwing[/ccProd]). Since it lowers power instead of just banishing, you also get some cool interactions like being able to attack over your opponent's tapped [ccProd]Laser-Arm Drakon[/ccProd] without KOing your [ccProd]Aqua Strider[/ccProd].

Take a look at the other decks in the metagame that try to put control decks on the backfoot with early pressure. [ccProd]Nix[/ccProd], [ccProd]Umbra[/ccProd], [ccProd]Rusalka, Aqua Chaser[/ccProd], [ccProd]Manapod Beetle[/ccProd], [ccProd]Mana Tick[/ccProd]...notice a pattern there? Negating your opponent's early gains in these matchups is crucial, because (a) it sets your opponent back, so now they can't accelerate their Dragons or easily evolve into their [ccProd]The Hive Queen[/ccProd], and (b) your late game is much better, and you just bought yourself a few turns en route to [ccProd]Andromeda of the Citadel[/ccProd]. It's also monocolored, so if you're in Darkness, it's an easy inclusion since it won't interfere with mana decisions.

It also has limited (albeit notable) applications in the late game in control mirrors. This won't happen very often, but it bears mentioning. Cards that affect every creature in your opponent's battle zone are few and far between in Kaijudo; we've heard stories of [ccProd]Suffocate[/ccProd] allowing [ccProd]King Tritonus[/ccProd] to attack over an opposing copy, but that likely was the only real development during that turn since it costs 7 mana. [ccProd]Toxic Fog[/ccProd] on the other hand, can be an absolute blowout. [ccProd]Stormspark Blast[/ccProd] into Fog is only 9 mana, and if you are fighting against a similarly-paced control deck, there's a good chance the -1000 power means you can attack favorably over their entire team. Plays like that will win you the game on their own, and this is the matchup in which [ccProd]Toxic Fog[/ccProd] is seemingly least effective!

[ccProd]Toxic Fog[/ccProd] is far from essential, but it gave Bobby Brake a unique edge en route to his title. Give it a try in your control deck! We're staying in Bobby Brake's world with our second tech choice: [ccProd]Wave Lancer[/ccProd]. In the last edition of this series, I pointed out the unexplored synergies that Leviathans like [ccProd]King Neptas[/ccProd] and [ccProd]King Coral[/ccProd] allowed for alongside [ccProd]Squillace Scourge[/ccProd], and [ccProd]Wave Lancer[/ccProd] falls right into the mix. 5500 power is a nice benchmark for blocker power -- it gets over the ever-worrisome [ccProd]Herald of Infernus[/ccProd], and it's big enough to stymie and subsequently skirmish with any of the Drakons.

It's unfortunate that [ccProd]Wave Lancer[/ccProd] is quickly outmaneuvered by an opposing Lyra, especially if you're on the draw. Still, at least it paints a giant bullseye on its head, while never actually costing you a card thanks to its Remount ability. As control decks approach 12+ mana, being able to deploy a blocker and kill spell on the same turn can be huge, and [ccProd]Wave Lancer[/ccProd] gives you a nice assurance that you'll always be able to throw an extra roadblock your opponent's way. He can become really annoying really fast.

Space is tight in 4-color control decks, but if you're drawn toward a 3-color list with some Leviathans for support, you could do much worse than [ccProd]Wave Lancer[/ccProd]. 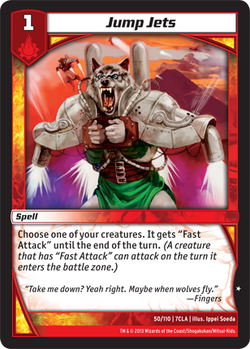 Yes! Yes! My favorite card to play for the past few weeks has been [ccProd]Jump Jets[/ccProd], bar none.

Why? Consider the face you're making right now as you read this section of the article. Now consider your face if your opponent were to actually beat you with it.

[ccProd]Jump Jets[/ccProd] reads like a card geared purely for limited play, but believe me when I say it has constructed applications. Yes, it's a spell that isn't a shield blast. That's a major strike against it. Yes, the ability is very narrow and doesn't help you unless you're already in a good position. Yes, the art features an angry wolf with a jetpack. All valid points.

The thing that makes this card a force to be reckoned with, though, is two little words: fast attack. Fast Attack is the best keyword in the game. Take a look at any fair but powerful creature, and then imagine how much better it would be if it had Fast Attack. It's night and day.

In most decks, playing a creature off-curve and paying one more for it (and expending two cards from your hand) just to give it fast attack isn't worthwhile. What about a deck wherein, under the right circumstances, [ccProd]Jump Jets[/ccProd] is essentially free? I'm talking, of course, about Dragon decks. Space is tight in Greed Dragon / "Birds of War" variants, but Championship competitor Damon Carron brought to light the streamlined power of a WDF (Grixis) Dragon build, eschewing Light for more reliance on [ccProd]Herald of Infernus[/ccProd] and quicker kills. [ccProd]Chain-Lash Tatsurion[/ccProd] does a formidable job as a replacement for Lyra when all you really want to do is trigger Herald's War Cry. A deck like this, being only 3 colors, opens up a lot of space for tech like [ccProd]Jump Jets[/ccProd].

Consider this scenario: you're playing against Megabugs and curved out with [ccProd]Nix[/ccProd] into [ccProd]Herald of Infernus[/ccProd]. Your opponent summons [ccProd]Rusalka, Aqua Chaser[/ccProd], though, and continues his assault, thinking he's set you back too far to be on the Herald plan. Not to worry, though -- Herald is back next turn for only 4 mana, and he's strapped on his jetpack! Now he careens into [ccProd]Manapod Beetle[/ccProd], calls forth an Infernus, and calls it a day.

A Dragon deck like this has a self-imposed clock against control decks, so while [ccProd]Jump Jets[/ccProd] becomes near worthless when there are no Fire Birds around, you're probably going to have trouble winning if you can't draw birds anyway. If you commit to this strategy, though, [ccProd]Jump Jets[/ccProd] will give you wins out of nowhere that your opponent couldn't have possibly prepared for. Any double breaker becomes an imminent threat when paired with the Jets; [ccProd]Tatsurion the Unchained[/ccProd] can bulldoze over an entire sea of creatures!

It's clunky sometimes, but it's easy mana. Once your opponent realizes that they can never leave a tapped creature out with less than 5000 power going into your turn, they'll lose a lot of options, especially if they're playing Megabugs. [ccProd]Jump Jets[/ccProd] is fun, flashy, and spectacular when it guides you to victory. Try it out in a concise 3-color Dragon build and then take a mental picture of your opponent's face when your strap on your jetpack and bash them!

Summer Championship is over, What’s next?
Deck Doctor #18: Noble Knights and Atmosphere Control
Our Contributors