Portal Tech: Looking Ahead to the Kaijudo Championship Now that the inaugural KMC season is over, it's a good time to relax and reflect on the changes Kaijudo has experienced over the past few months. The pressures of expectations and trip preparations no longer linger for most of us -- unless of course you're one of the lucky few who qualified for the Kaijudo Championship in Seattle. It's a good time to try out some fun decks at your local Duel Day, try some booster pack-based limited formats, or even put together a "Kaijudo Cube."

If you're like me, however, and you're crazy enough to seriously consider traveling to Seattle to play in the Last Chance Qualifiers, this article is for you.

Welcome to the first in what I hope to be a series of articles that zeroes in on particular tech choices that have seen competitive play. The goal here is to touch on most of the major tier one decks and highlight standout cards. These cards may or may not be optimal inclusions, but they are sure to raise some eyebrows. In the spirit of the appropriately-named [ccProd]Portal Tech[/ccProd], here are three tech choices in that deserve immediate consideration in established decks: 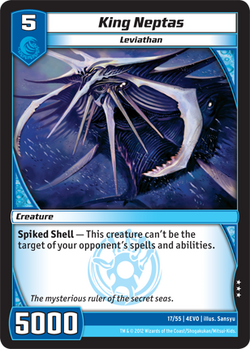 [ccProd]King Neptas[/ccProd] saw some play when Evo Fury was first released, but quickly faded into obscurity once Dragons barged onto the scene. Magic: The Gathering pro Gerry Thompson brought the steadfast Leviathan creature back to the forefront with his top at KMC Oakmont, using a deck boasting the full three copies.

Gerry notes that he went with Neptas so that he would be able to get aggressive in the control mirrors on a dime. To support such a strategy, he opted for a more slender 45-card WDL Control build, eschewing the ramp that Nature provides in favor of midgame consistency. The [ccProd]Keeper of Laws[/ccProd] into [ccProd]King Neptas[/ccProd] progression is very strong in the current environment; semi-sizable bodies that linger around in the battle zone threatening to break shields at a moment's notice can be a thorn in the side of the greedier control decks.

[ccProd]King Neptas[/ccProd] can give you the edge in the control mirror by allowing you to go under the WDLN variants. In a deck that best suits Neptas, the overall deck size will be smaller so that your crucial 3-4-5-6 curve is more consistent. You're also diluting the effectiveness of opposing discard options like [ccProd]Razorkinder Puppet[/ccProd] and [ccProd]Skull Shatter[/ccProd] by having an actual way to win the game outside of your finishers. You're also presumably aiming to curve out with creatures when possible, so your hand will be smaller and your opponent can't justify spending any amount of mana attacking your hand at the expense of developing his or her own board. WDLN/Keeper Control variants typically don't want to be forced into a creature arms race before they get to 9+ mana.

That being said, [ccProd]King Neptas[/ccProd] can be stymied by a commonly encountered card; namely, [ccProd]Lyra, the Blazing Sun[/ccProd]. Even though Lyra can't target Neptas with its Solar Flare ability, it still presents a significant hurdle. Attempting to swing in with Neptas while an opponent controls Lyra will almost always end in an unfavorable trade at some point thanks to Lyra's sturdy 6000 power. Giving your opponent a free card and then possibly allowing one of your Blockers to get eaten for a chance at another shield will contribute to you running out of gas prematurely. In a WDL shell playing Neptas, your ability to be "aggressive" is a bit of a misnomer, since you won't be playing any 2 or 3-drops that can get in for shields. Once Lyra drops on the other side of the board, unless you're (usually incorrectly) willing to expend a [ccProd]Terror Pit[/ccProd] on it, [ccProd]King Neptas[/ccProd] will likely be forced to sit still and just becomes a 5-mana-do-nothing. He's still relevant if you are able to take command of the board back by other means, but you don't want to play the waiting game against the colossal 50+ card piles with maxed out [ccProd]King Tritonus[/ccProd] if you can help it.

[ccProd]King Neptas[/ccProd] is an extremely solid card in the current environment, but is he enough to deter the fat decks? The Kaijudo Championship will likely give us the final verdict on that one.

We're staying underwater in the realm of the Leviathans with our second tech pick. Canadian player "AHShadow" opted to toss a singleton of this overlooked Rise of the Duel Masters rare into his WDLN Control deck that he topped KMC Orangeville with, and it certainly made me stop and take notice. 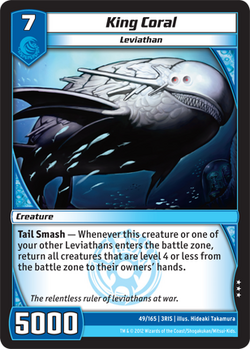 Coral finds himself at an unfortunate spot in the curve. A 7-drop with only 5000 power that isn't a double breaker needs to give you immediate value when it hits the battle zone to even be considered. While [ccProd]King Coral[/ccProd] won't win you the game on his own, his Tail Smash ability has become increasingly effective with the recent surge in play of [ccProd]Keeper of Laws[/ccProd]. Mass removal is very rare in this game, so even pseudo-removal like bounce can be extremely worthwhile if you're able to send back two to three opposing creatures. Your opponents will never think to play around this effect, so fields full of Keepers and Blockers will get savaged. It's nice that [ccProd]King Coral[/ccProd] leaves behind a body after he's done smashing his tail, but sadly, his 5000 power will quickly be outclassed on your opponent's follow-up turn.

Beyond the obvious benefit of getting rid of a flood of threats in the control mirror, he also has some utility against the midrange decks like Megabugs or Naya Dragon Beatdown. If you've been getting run over, he hits the table far too late to be of any benefit. But if you've been able to deploy a few Blockers and cast a few Shield Blasts along the way, sweeping up even a single [ccProd]Sword Horned[/ccProd] isn't the worst thing you can do, as long as you're firmly en route to Andromeda.

He also has a very cool interaction with the aforementioned [ccProd]King Neptas[/ccProd] and even [ccProd]Squillace Scourge[/ccProd]. Did you know that Scourge is a Leviathan? Bouncing away your opponent's level 4 or lower creatures is intimidating when you have Squilly waiting in the wings. Your opponent can't even re-play his small guys to get around it; any Leviathan summoned to your battle zone will trigger [ccProd]King Coral[/ccProd]'s effect. An opposing [ccProd]Squillace Scourge[/ccProd] locking your board down for a turn is bad enough, but getting rid of your little dudes too? Pretty rough.

True, he bounces your creatures too, but it isn't very hard to get more value out of this than your opponent through deckbuilding choices.

[ccProd]King Coral[/ccProd] is a little narrow in his application, and even knowing how good he can be, I'm inclined to call him a bit of a "cute" card. Don't sleep on him, though.

Wait, what? [ccProd]Stormspark Blast[/ccProd], a tech choice? How could one of the most ubiquitous (and quite possibly overrated) shields blasts in the game possibly be considered "tech?"

Have you seen it in Drakon Rush?

I've been aware of the power of [ccProd]Stormspark Blast[/ccProd] in rush decks ever since I was sadly handed my second loss in KMC Poughkeepsie by Thomas Rogers, running an early version of the concept. 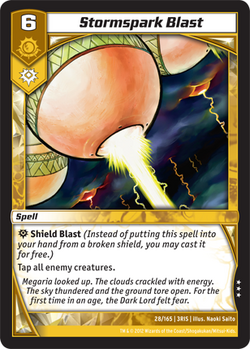 The thinking behind it is really quite simple: it's oftentimes the best possible shield blast when all you're trying to do is race, so why not throw it in to a red deck on the off-chance you buy yourself a turn? By including it, you lose out on access to [ccProd]Drakon Warchief[/ccProd], but this loss is inconsequential when you consider the fact that he has a virtually identical replacement in [ccProd]Draglide the Swiftest[/ccProd]. Yes, Draglide is weaker, but if you're playing Rush, it's almost always incorrect to be attacking anything other than shields with your 4-drop Fast Attackers anyway. If your opponent is able to hold the line with a couple of Blockers, then you're probably going to lose that game anyway, so the power difference is irrelevant.

The inclusion of [ccProd]Stormspark Blast[/ccProd] in Drakon Rush may seem unremarkable, but it can be the difference between a win and a loss. Over the course of a tournament, you may only see a copy in your shields once or twice. On top of that, your opponent may never break that Stormspark at a time where tapping his or her entire team is a difference maker. You'll need a pretty large sample size of games to accurately gauge whether [ccProd]Stormspark Blast[/ccProd]'s inclusion makes any difference at all.

That being said, I don't think you can argue that it isn't warranted, in theory. Your mana decisions in Red Rush are so simple that Stormspark being a Light card will almost never prevent you from playing your hand the way you want. You'll also virtually never hardcast it, so it's basically just a [ccProd]Plains[/ccProd] if you happen to draw it. Drawing multiple copies is unfortunate, but so is drawing multiple copies of terrible spells like [ccProd]Barrage[/ccProd] that do absolutely nothing outside of your shields, and even then will only be potentially relevant in the mirror match.

When you weigh all the pros and cons, it's easy to see that splashing [ccProd]Stormspark Blast[/ccProd] yields massive potential benefits with negligible downside. Is a more dedicated Fire/Light deck with [ccProd]Helios Rings[/ccProd] and [ccProd]Magris the Magnetizer[/ccProd] alongside the standard Drakon suite plausible? Be sure to test out different avenues so you can get an edge on the other aggressive decks.

Innovating with your own brew can yield great results, but it's not always possible. Sometimes, the format has been figured out. When this happens, tech cards can be the difference makers, and can give savvy deckbuilders a much-needed edge in the mirror match.

These three cards may go down as flukes, or they may set the new standard. Keep your eyes fixated on the Kaijudo Championship on August 4th to see how it all shakes out!