Princess of the Mermaids, Lena

You are here: Home / Princess of the Mermaids, Lena
Categories: Cardfight Vanguard
by Christopher Keller

Hello Cardfighters, my name is Christopher Keller from New York and I have been playing Cardfight Vanguard for over a year now. I discovered the game after I saw a friend of mine looking at his cards in class and he taught me how to play, I've been hooked since then. I've since formed a team with him, my girlfriend and another  friend, to make Team Royal Flush. Each of us has a nickname, mine is Mermaid Boy. Why is it Mermaid Boy, because of my fondness for the Bermuda Triangle clan. While all my friends wanted to make Narukami or Gold Paladin, I was desperate for my mermaids. Extra booster set Banquet of Divas brought me my sought after clan. I now have two Bermuda Triangle decks, but I want to talk about the first I made, centered around Bermuda Princess Lena. First I'll list all the cards in the deck:

Prism on the Water Myrota X2

Now let me explain some things you may notice. First in this build I use 8 Critical, 4 Stand and 4 Heal, with no Draw. This is because the Lena build utilizes lots of effects that let you Soul Charge or draw, or both in some cases. Throwing in Draw triggers would make you deck out really fast, so they are not included here. Bermuda Triangle Cadet Weddell: She's great to start with in this deck, since Lena does not have a ride chain like Pacifica and Riviere, you have more freedom. Weddell is good though because you can move her to the rear guard when you ride into Grade 1 and save her for later to be used with Rio.

Mermaid Idol Sedna: She is your ideal unit to ride as a Grade 1. She's a great booster and a greta way to start things off. Felucca and Myrota are best saved for the rear-guard circle so you can bounce them back to your hand to re-use their effects. 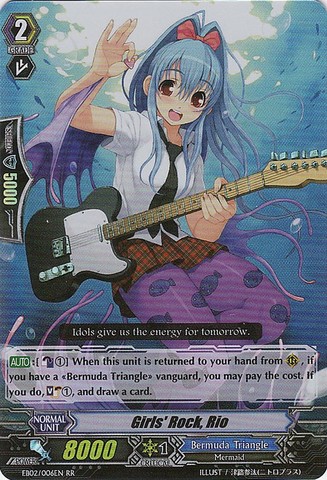 Girls' Rock Rio: She's the star Grade 2 and one of the MVP's of the deck. Her effect lets you Counter Blast  1, Soul Charge and draw a card when she goes back to your hand. You can get her back in your hand through the effects of Weddell, Top Idol Flores and Bermuda Princess Lena. Secondly you'll need cards in your soul, you can get one in the soul with her effect, or you can use the effects of the next card in addition to Weddell.

Bermuda Princess Lena:  She's our main Grade 3 and the one you always want to ride into. When you ride her, all Bermuda Triangle Rear-Guards are bounced back to your hand. This can be used to trigger Rio's effect and recycle the effects of Caravel, Felucca and Myrota, since you can then call them once more to use their effects. If you have 4 or more Bermuda Triangle Rear-Guards she gains an extra 3000 power. This means if you have that many Rear-Guards and she's boosted by Sedna, she'll be swinging for 21000 every turn before you add in any boosts from triggers. If for some reason you cannot ride into her and instead opt for Flores, you can call a Lena to the Rear-Guard and when you get another Lena to ride, you can use that Lena's effect to put the Rear-Guard Lena into your hand to use her effect again later on.

Top Idol Flores: She's our other main Grade 3. She let's you Soul Blast two cards to bounce a Bermuda Triangle to your hand when her attack hits. The good part, you can use it even if you attack a Rear-Guard, not just the Vanguard. You can get cards in your Soul through the effects of Weddell, Rio and Felucca, so it is not that hard to do.

Now it's important to understand that this deck is all about bouncing units to your hand and Soul Charging in order to fuel Rio's effect to Soul Charge and draw, as well as Caravel who lets you Soul Blast in order to draw. This means that it's very possible to deck out. If you use Rio's effect once in a turn and no other effects that let you draw or Charge that turn, with the Twin Drive you'll lose 5 cards, one from drawing, two from Rio's effect and two from the Twin Drive.b This is why it is important to judge how often to use Rio's effect and when you can stop using it. You'll be able to have large hand to defend with, but you'll thin your deck out quickly. This way it's best to try to get Lena to full power, in addition to Mermiad Idol Flute, so you can end the fight before decking out becomes a major issue.

One final issue I'd like to address is Prism on the Water, Myrota. When you call her both you and your opponent draw a card. People don't like this since your opponent draws too, though it isn't as bad as some people seem to say. early game people don't guard that much so they can build up to a Limit Break. Because of this, if you use her early on, chances are that the card they draw won't be used to guard for a while. there still is the chance that they'll get a Perfect Guard, but it's not guaranteed. So just use her early rather than later.

Finally, this is only my build, it's worked well and has had both good games and bad games. Is it perfect? It isn't, however that's what is great about the game, trying out a build and then seeing how to improve it. So get out there and experiment with all sorts of builds of all sorts of clans, and I the fearless Mermaid Boy will see you on the battlefields of Cray!