September Promos: Why They Are Good

You are here: Home / September Promos: Why They Are Good
Categories: Bobby Brake, Kaijudo
by Bobby Brake

Promos in Kaijudo have always seemed to be a little lack luster. Some of them have neat abilities and cool art but they never really see that much play. This upcoming month of September we are getting three new promo cards, one Duel Day, and two from the Shattered Alliances Set Premiere on the weekend of the 13th. Unlike some other promos, these really have the potential to be good and be playable in many decks. The fact that they will be our first Enemy-Civilization cards also might be the reason I am so excited about them. Let’s get right into it.

This is the first promo we are going to get and it comes out the week of September 1st. Those who attended the Kaijudo Champion Store Celebration in Kansas were able to all get one and get a firsthand look at the card. 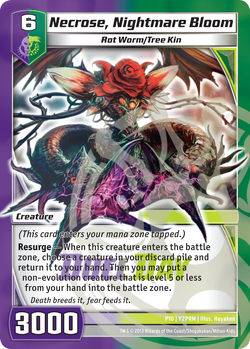 Looking at it you can see that it is a Darkness/Nature creature, that means you need to have both Darkness and Nature unlocked in your mana zone in order to play it. At first glance you probably think it is only good in a control deck, but it is good in that you can use it in other deck types. A deck I see this being used in is Megabugs. It can work really well if you use Fire in your deck. You can play him, get back The Hive Queen from your discard pile, then play Steamtank Kryon from your hand and set yourself up to swing in the following turn. It will also come in handy if you need a fast attacker for the win and you have a Gilaflame in your discard pile and draw this card. Worst case scenario you can just use it to get a creature back from your discard pile and play it.

One of the most popular decks that people want to use this in is Queen Kalima Control. There is sort of a little loop you can do, you attack with Queen Kaima, use Reanimate, get back Necrose and then if they banish your Queen Kalima, you can play Necrose and use Resurge and get Queen Kalima back and play another creature alongside Necrose, if you have it. Another card that is utilized in this deck is Ripper Reaper. It works really well with Necrose. If Ripper Reaper is in your discard pile, or just in your hand, you can play Necrose get a creature back and then play Ripper Reaper and use his Cursed Scythe ability for free pretty much.

This is one of the two promos that will be given out at the Shattered Alliance Set Premiere on the weekend of September 13th. To my 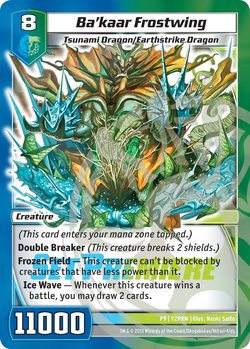 knowledge, this is the first dragon, that is two different type of dragons!(I may be wrong on that so sorry if I am) That makes this guy cool enough alone. Him being Water/Nature lets you use him in a deck that utilizes both of  those types of cards. Which is great for dragons because mana ramping and drawing are two  key strategies that help dragons maintain advantage and win. Off the top of my head the best  type of deck to use this guy in would be a Water/Nature/Light dragon control deck. Utilizing both Nix and Lux can make this guy a force to be dealt with.If you have Lux and him both in your battle zone, you  have a huge double breaking (pretty much) unblockable dragon that if banished you can just  sacrifice lux to keep him in the battle zone.  That we know of so far, there are only 3 blockers  that can block Ba'kaar, they are Eternal Haven, Twilight Archon, and Guardian Akhal-Teek.  His Frozen Field ability, which makes it to where he can't be blocked by creatures that have  less power than it, combos greatly with his second ability, Ice Wave. Ice Wave says when  Ba'kaar wins a battle, you may draw two cards. If you are using light for tapping your  opponents creatures and you need some cards in your hand he can take down about every  creature and get you those cards that you need. He may seem a little slow to some, but with  the assistance of birds and mana ramp he is going to be a card to look out for.

This is the next card you will get at the Shattered Alliance Set Premiere. He is probably the one I am most excited for. This is the first card in Kaijudo that gives us random discard.All the discard cards out right now just have your opponent choosing, 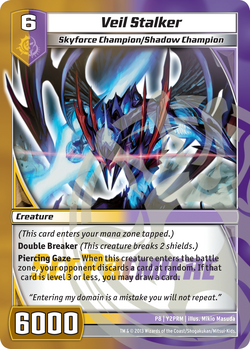 they are great but sometimes not that effective. His Piercing Gaze ability not only has your opponent discard a card at random from their hand, but if it is a creature that is level 3 or less, you may draw a card. I would like to think they put that little part in there so we can use this as a good anti-rush/anti-aggressive card. It has the potential to generate a plus two against your opponent if you are lucky enough to discard a low costing creature. On top of a great effect he is also a Double-Breaking 6000 body creature. He is able to apply pressure to your opponents field and hand at the same time. A fun deck you can throw him in is a Skyforce Champion deck. It is cool how they made him a Skyforce Champion as well as a Shadow Champion, he is champion of both ends of the spectrum. You can play him turn 6 and then evolve him into Azuri on the next turn. One card that his been previewed from Shattered Alliances is Curse-Eye Black Feather. It has an ability called Soul Blast and whenever your opponent discards a card, you may draw a card. It costs 5 mana and is a darkness creature. If you can manage to play that before Veil Stalker, get ready to have some fun and see your opponent get sad.

I hope all of you are looking forward to using these new cards as much as I am. These enemy-civilization cards are going to open up complete new decks for Kaijudo and there will be an endless amount of decks to be built. As more new cards come out new combos will be made and new ideas will be sparked. It is least of all to say that Shattered Alliances will have a lasting effect on  the game and change the way we build and play. Feel free to share your ideas you have with these promo cards and what you are going to use them in.