Hello readers, I'm Conner Morgan. I'm a member of Team Tapped Out, the 1st place team in the North American Team League National Championships. I've started playing Cardfight!! Vanguard when the game first launched in North America and I’ve played actively since. I have a lot of experience as well as insight in the game when it comes to playing and deck building and I'm happy to be a part of the #1 underdog TCG!

As many of you are aware, the two trial decks “Liberator of the Sanctuary” and “Eradicator of the Empire”, featuring the Gold Paladin and Narukami clans respectively have been out for a few weeks by now.  This has given players a bit of time to play with or against the new break ride units. While it is pretty much established that [ccProd]Eradicator, Vowing Sword Dragon[/ccProd] needs further reinforcements from the upcoming  Set  10: Triumphant Return of the King of Knights to be competitively viable due to a lack of synergy with [ccProd]Dragonic Kaiser Vermillion[/ccProd] and the other current Narukami cards, [ccProd]Solitary Liberator, Gancelot[/ccProd] has been seeing a lot of play. Even without the future Liberator cards in Set 10, Gancelot mixes very well with Gold Paladins that have already been released! However, there is a lot of confusion on which Gold Paladin build is best for Gancelot, how to pilot it, and what to do against it, which is what this article seeks to accomplish!

For starters, let’s go over what it does. It has 11k power and is a break ride unit, which means that its skill activates when another Gold Paladin rides over it upon Limit Break. It gives 5k power to three rear-guard units (sounds similar to [ccProd]Soul Saver Dragon[/ccProd]), as well as 10k power to the vanguard for the duration of the turn. It also has another skill, which grants it 2k power upon an attack to the vanguard, making it a 13k standalone, 18k with a 5k forerunner, or 21k with an 8k vanilla Gareth behind it. The 2nd skill is what makes it an effective vanguard to be used against cross ride units or other 11k vanguards, making it hit for consistent numbers. What makes Gancelot so good though? One might think that with Gancelot ridden on the vanguard circle, the Gold Paladin deck seems pretty vanilla until Limit Break. That is completely false though, as Gold Paladins have many effective Grade 2 units to capitalize on their early game.

It’s true that your superior calls aren’t as effective early game when riding Gancelot. After all, what makes [ccProd]Great Silver Wolf, Garmore[/ccProd] so good is the huge advantage turn 3 with a [ccProd]Listener of Truth, Dindrane[/ccProd] superior call for a +2 in card advantage (that’s the equivalent of a free twin drive!) However my friends, all is solved with 4 copies of [ccProd]Player of the Holy Bow, Viviane[/ccProd]. For those who don’t know, she is a 9k Grade 2 that when she lands a successful attack while boosted, she lands a free superior call from the top of the deck for a measly cost of 1 Counterblast. This is very powerful early game, as Viviane forces a lot of pressure on a Turn 2 ride. What some don’t realize though is that an early game Viviane superior call makes up for the lack of a superior call one would have gotten on a Garmore ride, and you’re able to make the most use out of a very threatening Gancelot ride for the later game. It’s the best of both worlds! Viviane I feel is a must at four copies, due to its powerful consistency with Gancelot. 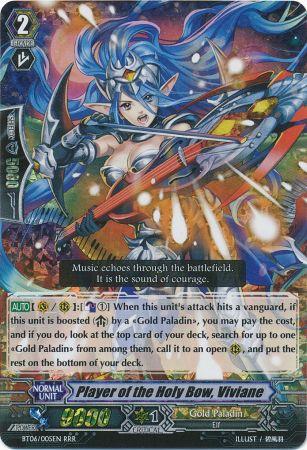 Another very effective method for early game superior calls is off the [ccProd]Spectral Duke Dragon[/ccProd] ride chain. This infamous deck took the 2012 Vanguard world tournament season by storm as the most popular deck and for good reason. For those who don’t know, when [ccProd]Black Dragon Knight, Vortimer[/ccProd] (Grade 2) is ridden on top of Scout of Darkness, Vortimer (Grade 1), you retire a unit on your field to superior call TWO units from the top of the deck for a free +1, no Counterblasts required. The same happens when [ccProd]Spectral Duke Dragon[/ccProd] is ridden on top of the Grade 2. Riding Gancelot over the Grade 2 is an acceptable scenario, since you netted a +1 superior call earlier in the game and you set up a very nasty combo with [ccProd]Spectral Duke Dragon[/ccProd], which will be gone over later.

An alternative option is to utilize [ccProd]Blaster Blade Liberator[/ccProd]. He essentially is just like the [ccProd]Blaster Blade[/ccProd] of old. For a Counterblast of two while controlling a "Liberator" vanguard, he retires a front row rear-guard. While it isn't the most game breaking skill on the planet, it gives Gold Paladins something they never had before: on demand removal. It also is something to do in your early game, when you have a Gancelot ridden and not much else to do with your open counterblasts. Worst case scenario, it's just another 9k Grade 2, which isn't bad by any means unless we're talking about 13k cross ride vanguards.

So you may say “Okay that’s cool, but what sort of combos can Gancelot play with?” One very popular choice is combining it with [ccProd]Blazing Lion[/ccProd], [ccProd]Platina Ezel[/ccProd] for a final turn play that if successful will virtually guarantee a win. Every attack will end up hitting for way beyond reasonable guarding numbers. Once again for those who are not aware, [ccProd]Platina Ezel’s [/ccProd] skill is upon Limit Break 5, a Counterblast of three nets 5k power to EVERY rear-guard on your field. Very scary, but think about it with a Gancelot break ride! Assuming a full field, you’ll have one rear guard column gaining 20k power, one gaining 15k power, and your vanguard gaining 10k from the break ride and 5k from your boosting unit. This is a very powerful combo that can flat out end games, but it does have its flaws. For one, he is a Limit Break 5 so your opponent can very easily play around it if they notice a Drive Checked [ccProd]Platina Ezel[/ccProd] enter your hand. They can also try to keep their damage at 4, making a break ride less effective and keeping your mid-late game very vanilla. Lastly, it is also bad to ride [ccProd]Platina Ezel[/ccProd] on Turn 3, as the card is an 11k vanilla vanguard until you hit five damage. Therefore, I recommend Platina is a 1-of tech choice in Gancelot centered decks, making it a very nasty surprise for an unsuspecting opponent along with not being stuck riding it very often on Turn 3. 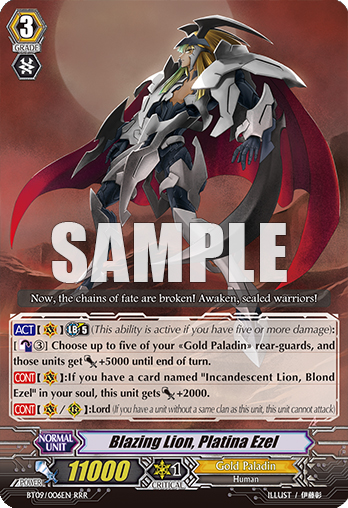 As I mentioned above, Gancelot has some very nasty combos with [ccProd]Spectral Duke Dragon[/ccProd]. His Limit Break allows him to re-stand after it attacks with a loss of Twin Drive for 2 Counterblasts and 3 retired rear-guards. So why is this good? Don’t forget that your vanguard gains 10k power on a break ride turn, and Spectral Duke Dragon will KEEP that power for the duration of the entire turn. Factor that in with your rear-guard columns making the most out of the power given from the break ride, as well as a Spectral Duke Dragon hitting for 21-26k and that’s devastating! Stack a critical trigger on top of that re-standing Spectral Duke Dragon, and you might seal the game right there. The Duke-Gancelot deck does have its inconsistencies though. For one, a present problem that the deck always had was that a missed ride chain meant a lack of superior calls. The deck mitigated this in the past by running [ccProd]Great Silver Wolf, Garmore[/ccProd], but with Solitary Liberator, Gancelot taking the other Grade 3 slots; suddenly we don’t have a plan to superior call at all! That means quite a lot since the Gold Paladin clan is all about superior calling, and you’ll find yourself running out of units fast and/or lacking units to even use if you made no superior calls at all early-mid game. This leaves the Duke-Gancelot deck a moderate high risk, very high reward deck that can easily take games at locals, but may flop sooner or later in a large tournament setting. 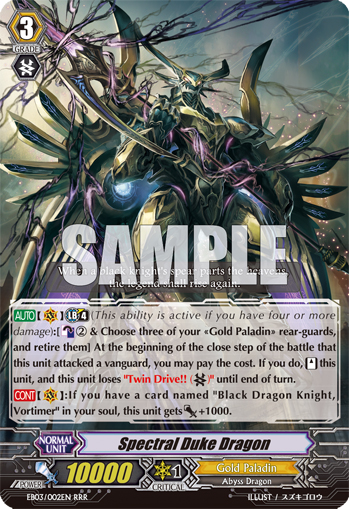 The best option I feel is to simply combine it with [ccProd]Great Silver Wolf, Garmore[/ccProd] and there are many good reasons why. The first and foremost is consistency. When you have a deck consisting of Gancelot and Garmore as your Grade 3s, you’ll never have a “mediocre ride.” Garmore has been proven to be a fantastic ride on Turn 3, and when you ride Gancelot, well you’re sticking right by your game plan! The 2nd reason is that Garmore and Gancelot are best friends, so much so that Gancelot (and Bushiroad) are nice enough to allow Garmore to call his friends BEFORE applying the power to rear-guard units. Is your field looking rather empty with only one rear-guard? Simply call Lop Ear Shooter from the deck, get another rear-guard off of its skill and suddenly you have three cards to use Gancelot’s skill on. Have extra counterblast available and want to make the most of it? Call Blaster Blade/Dark Spirit from the deck, retire a rear-guard for free and reap the benefits of the break ride! Simply want to plus in card advantage? Call Listener of Truth, Dindrane and +1 instead while reaping Gancelot’s powerful ability! It’s practically like a swiss army knife, and it’s very consistent. Again, if you happen to miss seeing Gancelot initially, riding Garmore is rarely ever bad. You can simply ride Gancelot over Garmore later, and try to break ride later in the game if the situation allows you too. Add all this together, and you have the following: consistent, powerful, and versatile. 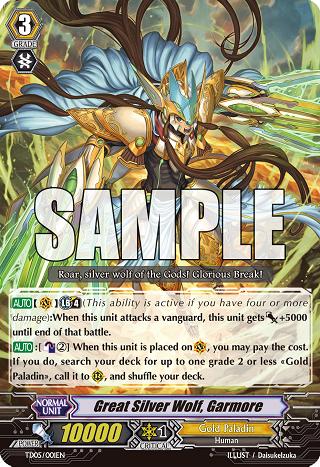 So what does one do against such a monster? For one, I can say that this deck has no direct weakness. It doesn’t have any bad matchups in terms of clans. For a player playing against a Gancelot deck, the first and foremost thing to do is to scout out what build you are up against: whether it be Garmore, Duke, Platina, or some weird mash of the three. A general rule of thumb is against the Gancelot matchup, you’ll want to guard early more often. The reason for this is Gancelot loves break riding when you are at five damage, meaning you are forced to guard every attack and use a lot more cards, whereas if you are at less damage, you can simply take the attacks and live through the “big play” of your opponent's deck. Keep yourself at 3 to 4 damage, only putting yourself at Limit Break (if you run a deck with one) when necessary and optimal. Also, pay close attention to the drive checks. If you don’t see a Vortimer starting vanguard, it’s either the Platina or the Garmore build. If you see cards like Lop Ear Shooter and Listener of Truth, Dindrane being Drive Checked, you can assume at this point that you are up against Garmore. After this is established, you can figure out how best to guard and use your cards as efficiently as can be.

From my play testing, this is the deck list that I’ve settled with. I believe this to be the best mix of cards until Set 10 drops, and I built it to be as versatile as possible to deal with a variety of situations.

I do hope you enjoyed this article and that it shed some light on how to effectively use [ccProd]Solitary Liberator, Gancelot[/ccProd]. Gold Paladins are the most versatile clan in the game currently and Gancelot brings a lot more options to the table. I believe it to be the best deck to play until Set 10 drops, try it out for yourself and see what style fits you!