The Inevitability of Andromeda and Infernus

It’s no secret: [ccProd]Andromeda of the Citadel[/ccProd] and [ccProd]Infernus the Awakened[/ccProd] are the most talked about cards in Kaijudo today. It’s blatantly obvious that these two are pushed cards, but understanding the extent to which the metagame has been warped just by their very existence takes a little further examination.

Where You Want to Be

Adapting the speed of your deck with respect to where you expect the rest of the meta to be is called positioning. It isn’t enough to evaluate the cards in your deck in a vacuum; you also have to account for how your plays will be able to branch out differently depending on the speed of your opponent’s deck.

For example, let’s say your deck is fine-tuned to efficiently summon [ccProd]The Swarmleader[/ccProd] on turn 5 every single game (bear with me here and let’s say someone out there thinks it’s an actual deck right now). Your Megabug bait ratios are flawless, your finisher is a fast attacking double breaker, and your deck never forces you to make tough mana decisions. You’re in great shape, right? Not exactly. Executing your plan does not guarantee success in and of itself. Megabugs are horribly positioned in the metagame right now. Unless your plan of attack actually has a win condition, it doesn’t matter how consistent it is.

Choosing the correct deck for the fast-approaching KMC season will require anticipating the existing metagame and endorsing a build that is well-positioned against it. Where do you want to be right now? It’s my strong opinion that if you want to play one of the big two decks from the Evo Fury meta without any changes, you’re misguided.

The Evo Fury metagame popularized two decks in particular – SaberBolt and Blurple. Check out CVH and Aiden Thorne’s previous articles for the ins and outs of these two decks. They operate very differently, but in terms of speed, they can both be classified as midrange decks – the former being more aggressive and the latter being more tempo-based. A midrange strategy aims to curve out in the middle turns of the game (around turns 3 to 6) and systematically take out opposing shields, making a turn 7 or 8 win a foregone conclusion.

The emergence of Dragon control decks featuring [ccProd]Andromeda of the Citadel[/ccProd] and [ccProd]Infernus the Awakened[/ccProd] now present a slew of problems for these two decks. 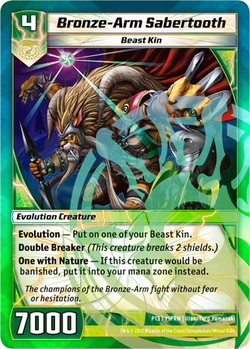 SaberBolt tries to prioritize breaking shields while ramping mana through [ccProd]Bronze-Arm Sabertooth[/ccProd].  Sadly, even an extremely fast start with  [ccProd]Prickleback[/ccProd] and turn 4 Sabertooth can be slowed to a crawl with a turn 5 [ccProd]Lyra, the Blazing Sun[/ccProd]. An aggressive SaberBolt draw means the player should curve out with creatures in the early game. This puts the largest amount of pressure on shields, but at the same time, you don’t have the luxury of dealing with your opponent’s Fire Birds. On the other hand, if you do spend your turn 3 or 4 playing a [ccProd]Heat Seekers[/ccProd] or [ccProd]Bone Blades[/ccProd] on [ccProd]Nix[/ccProd], for example, you’re still extending the length of the game, which will only benefit the Dragon player.

Most Dragon decks will be packing a Darkness section with [ccProd]Terror Pit[/ccProd] and even [ccProd]Bone Blades[/ccProd] (in a nod to this matchup), along with less immediate answers in the Water section like [ccProd]Crystal Memory[/ccProd] and [ccProd]Bottle of Wishes[/ccProd]. The SaberBolt player has no choice but to attack shields as quickly as possible in this matchup, but any one of these in shields can be enough to stave off pressure and push the game into turn 8 or beyond. Nine times out of ten, the SaberBolt player expects the game to get to at least turn 8 anyway, hence the importance of [ccProd]Bolt-Tail Dragon[/ccProd] in the existing build. [ccProd]Bolt-Tail Dragon[/ccProd] excels at putting a nail in an already on-tilt opponent’s coffin, but it’s woefully inadequate at gaining back traction once the opponent summons Andromeda. 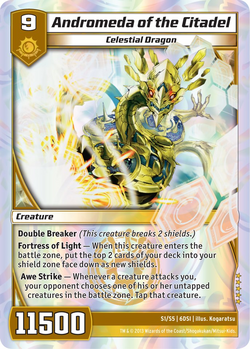 [ccProd]Andromeda of the Citadel[/ccProd], in fact, is the ultimate roadblock for current builds of SaberBolt. Those shields you worked so hard to break? They’re back, and there’s a good chance at least one of them is another relevant shield blast you have to go through. You have fast attackers? Well you’re going to have to tap an extra guy every time you attack, so the ol’ double Gilaflame plan is neutered. You had a shot at winning, but ran into an unfortunate Shield Blast on the 6th or 7th shield? Your “finishers” are tapped, and guess what? Andromeda has more power than all of them. Now your opponent just summoned a 2nd Andromeda on their next turn. Scoop up your cards.

Blurple aims to eliminate shields with a midgame speed similar to SaberBolt, but it puts more emphasis on tempo plays and controlling the board. Back during Evo Fury, the Blurple deck could often extend the length of the game if need be to ensure safe attacks, while picking off the opponent’s board position with value creatures and slowly solidifying its own board position. As of DragonStrike Infernus, it’s simply not possible to do this anymore with the same success percentage.

Blurple’s early game blocker suite is completely irrelevant in this matchup. Creatures like [ccProd]Cyber Sprite[/ccProd] and [ccProd]Scaradorable of Gloom Hollow[/ccProd] still hold importance as Evolution bait, but the other benefits enjoyed against aggressive decks are nowhere to be seen. Value creatures like [ccProd]Screeching Scaradorable[/ccProd] and [ccProd]Rusalka, Aqua Chaser[/ccProd] do an admirable job of clearing out Fire Birds, but they might as well have big targets 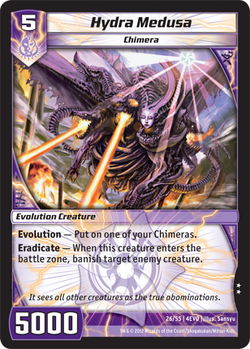 on their foreheads for [ccProd]Herald of Infernus[/ccProd]. Your best bet is to get in for as many shields with [ccProd]Emperor Neuron[/ccProd] as you can, but you absolutely have to hit him on turn 3, and that’s not always realistic.

[ccProd]Hydra Medusa[/ccProd] is still the ultimate “enters the battle zone” trigger; unconditional removal is a very powerful effect. The fact that is isn’t a double breaker, though, means each additional shield that opposing Andromedas drop is another mountain to climb. You need to be able to banish [ccProd]Andromeda of the Citadel[/ccProd] and then swiftly go in for game, and that’s easier said than done with this deck. Even a strong play like [ccProd]Dark Scaradorable[/ccProd] and [ccProd]Hydra Medusa[/ccProd] side-by-side only breaks two shields, and it costs a whole lot of mana.

It also doesn't help that [ccProd]Hydra Medusa[/ccProd]'s 5000 power isn't big enough to stand up to [ccProd]Herald of Infernus[/ccProd], [ccProd]Lyra, the Blazing Sun[/ccProd], Tatsurion the Unchained, Spellbane Dragon, [ccProd]Bolt-Tail Dragon[/ccProd], or even Billion-Degree Dragon. The Dragon player will almost certainly follow up with one of those cards, and even if it isn't Lyra, you now need to deploy all your blockers and play "protect the Medusa." This plan is almost never fast enough to win before turn 8 or 9, when Andromeda becomes a factor. So in the interest of keeping up your offense to account for this, it's pretty common that you curve out to [ccProd]Dark Scaradorable[/ccProd] on turn 6. Sadly, you simply give your opponent a free card that makes his or her mana decisions en route to turn 8 or 9 easier, and then in turn the [ccProd]Dark Scaradorable[/ccProd] will likely be locked down and eventually bumped by a Lyra.

The worst part is that everything I just pointed out is a mere annoyance in this matchup. The real problem is [ccProd]Infernus the Awakened[/ccProd]. 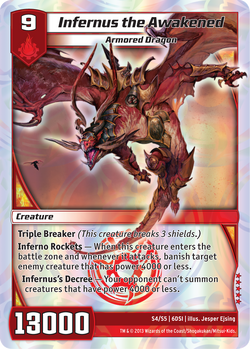 You better hope you draw every last one of your [ccProd]Terror Pit[/ccProd]s, or Infernus hits a Pit in shields on his first triple break, because he blanks virtually all of Blurple’s creature base. You need to hope you have an untapped Medusa or Scaradorable that you can Evolve on next turn, because once your battle zone is cleared you have no way to recover outside of your spells. You can’t summon any of your efficiently costed bait for your Evolution creatures, you can’t bounce him with Rusalka, and any blockers that aren’t banished immediately won’t even be able to chump block in later turns. It’s the nightmare scenario for such an efficiently-costed small creature deck, and one of the few times your strength becomes a weakness.

If there’s one thing Wizards of the Coast has proven, it’s that every set is going to change the metagame drastically. SaberBolt and Blurple in their “known” approximation are simply not well-positioned against Dragon Control for the pre-Clash KMCs.

There are, of course, caveats to this – Blurple would much rather face WDL Dragons so that it can skate by [ccProd]Infernus the Awakened[/ccProd], and a fast SaberBolt draw has the potential to outpace WFL Dragons without a Darkness splash. SaberBolt can also feature a stronger Darkness section in an attempt to bust out [ccProd]Skull Shatter[/ccProd], and Blurple can put more emphasis on [ccProd]Emperor Neuron[/ccProd] and can add [ccProd]Emperor Dendrite[/ccProd]. These are all things you should be testing if you intend to play one of these decks at a KMC. If you really want to play one of these strategies, re-evaluate what they do well in the current environment and position your deck with as many answers as you can against Dragon Control variants. Trust me, you’ll be seeing a lot of them.

Mermails and Lord of The Tachyon Galaxy
The Physician’s Recommendation: Skill Beast Beat and Six Samurai
Our Contributors