Happy Fourth of July weekend to all readers from the United States, and for everyone reading from outside the states welcome to yet another Cardfight!! Vanguard Article. Today’s Topic is the new extra booster that is set to come out August 28th. This set is the first extra booster or half set as it is commonly known to come out in the Generation or “G” era. As such it has been given a new name the “Clan Booster”. Over the past couple of years we have seen Bushiroad release extra boosters which would give support to multiple clans as well as we saw the release of cards specifically from the manga. Bermuda Triangle is no stranger extra booster sets, considering nearly all of their cards have come from three extra boosters, EB02 Banquet of Divas, EB06 Dazzling Divas, and EB10 Divas Duet, and now G Clan Booster 1: Academy of Divas.
This new set will feature 40 cards but the most impressive part is the fact that we will see 12 new SP or Parallel rares. These 12 cards will also feature altered art versions but that isn’t the only thing they will also be full art versions of the card which means the text box will be completely opaque allowing the owner to see the entirety of the cards art. These alter art versions show the Cards character as both a mermaid in its original art and with legs instead of a tail in its SP version.

Not only do the two main architypes for Bermuda Triangle get new support but this set shows the release of a new skill type, Harmony. This ability gives you a specific skill or attack boost if you have another unit in the same column with the harmony ability. The two units must be in the same column in order to active the Harmony ability, and if one of the two units leaves the column then harmony is broken and you will no longer receive the skills acquired through this state. This same occurrence happens when you stride on a unit with harmony. Since the vanguard that had harmony becomes part of the soul you will no longer be in the harmony state. A prime example of the harmony state is “Miracle Voice, Lauris” 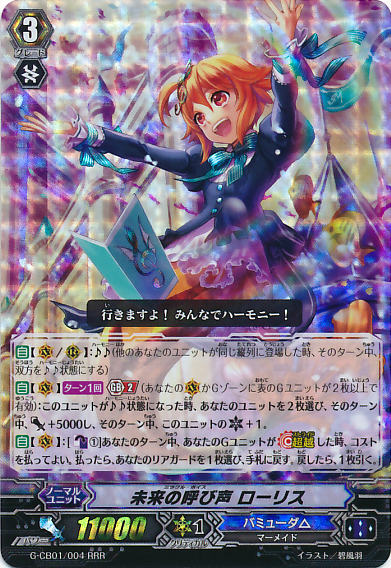 This units effect states that if you are Generation break 2, “when this unit becomes Harmony state, choose two of your units, they get Power +5000 until end of turn, and this unit gets Critical +1 until end of turn.” It also has a break stride ability that allows you to return or bounce one of your rear-guards back to your hand. If you do you draw a card. Partner this ability with any rear-guard that has harmony as well and not only are you attacking for a large number but you are also giving yourself a critical. The harmony state opens up the door for large column attacks that Bermuda Triangle have been known for and makes these large attacks more consistent.
The next notable card is an evolution of sorts. Extra Booster 6 Dazzling Divas, unleased one of the most powerful cards of that format PRISM-Promise Labrador, and with this new Clan booster set we are being given the next level of that card, a stride unit named. PRISM-Promise Princess Labrador. 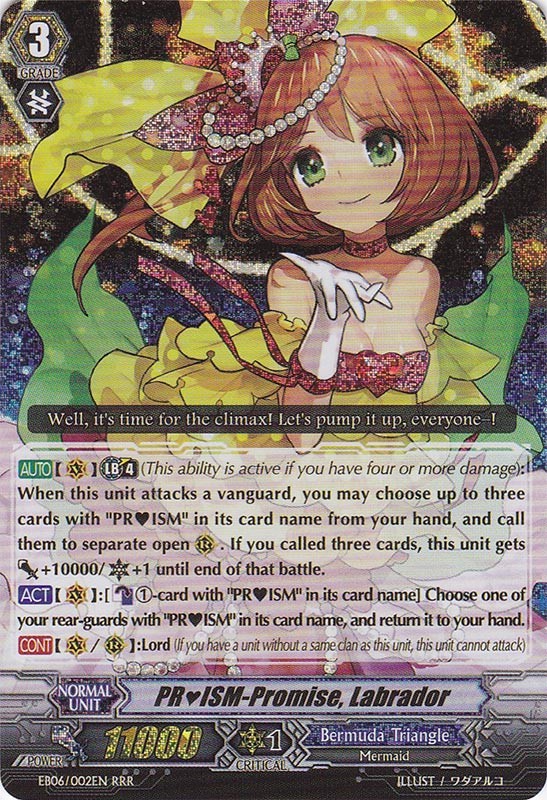 Princess Labrador expands the ability of its previous version. The Original Labrador states if you are limit break four (have for or more damage) When this unit attacks a vanguard you may choose up to three cards with PRISM in its card name from your hand and call them to separate open rear-guard Circles, if you called three cards, then this unit gains +10000 power and +1 Critical until end of that battle. Its second ability is an activate ability with a cost of counter blasting 1 card with PRISM in its name. Once you pay cost you choose one of your rear-guards with PRISM in its name and return or bounce it back to your hand. Princess Labradors ability is an activate ability that can only be used once per turn. You persona flip (flip a copy of this unit in your G zone) one copy of Princess Labrador and if you have a unit in your hear with PRISM in its name you choose up to two of your rear-guards, and until the end of that turn they get +5000 power as well as a secondary skill. When the units you’ve chosen attack or boost, at the end of that battle you may bounce them back to you hand. Partner this ability with two units already in harmony you can easily attack your opponent with a 28000 or greater rear-guard column.
The next “evolution” card we see in this new set is the release of two new Duo Sister Meer Cards. “Duo Eternal Sister, Meer”. 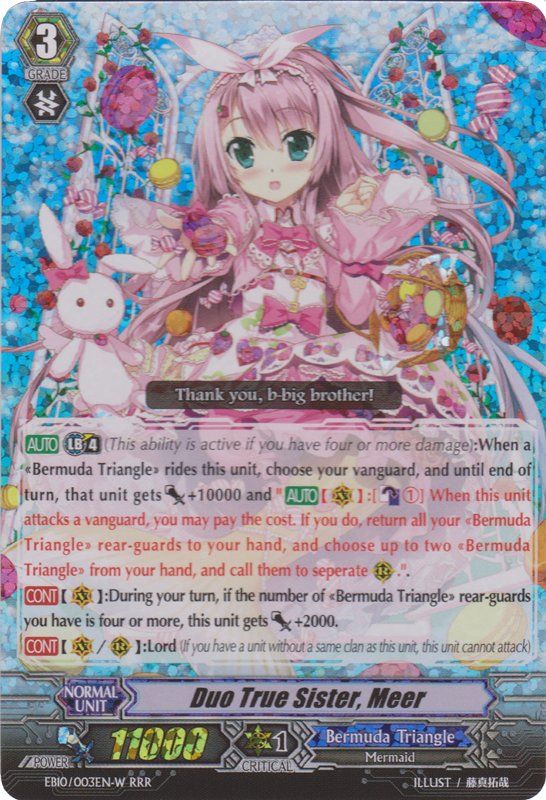 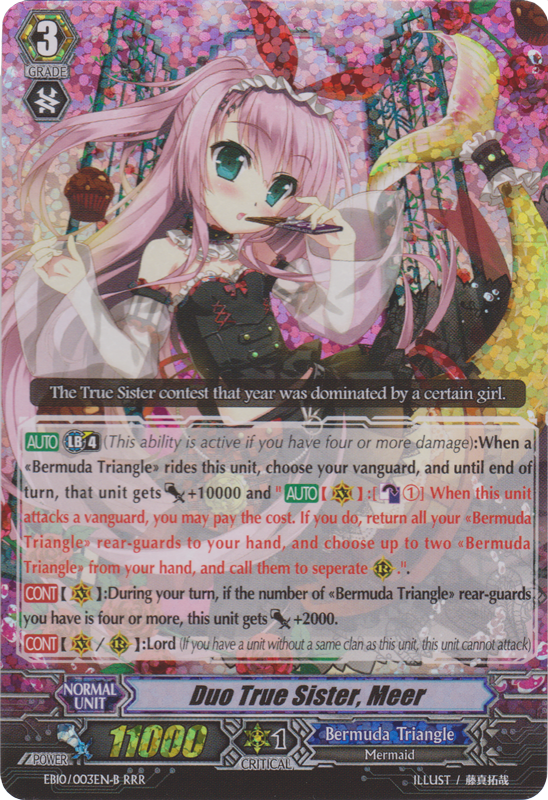 The thing about Duo cards is they come in pairs so there are two “Twin” versions of each of the cards. The Original was Duo True Sister Meer and it was a break ride that gave you +10000 power and when it attacked you could return all your rear-guards and call 2 new units to rear-guard circles. Duo Eternal Sister Meer states that if you have Limit break 4 enabled you can counterblast 1 card in your damage zone, and choose three cards from you hand and discard them. At the end of the battle that this unit attacked a vanguard, you may pay the cost. If you do choose a card named “Duo True Sister, Meer” from your soul, ride it as STAND, choose a card named “Duo Eternal Sister, Meer” from your soul, put it into your hand, choose a card from your hand and discard it. “Duo Eternal Sister, Meer” also has a second effect that is a once per turn activate effect. To use it you must first counter blast one damage, and soul blast 1 (send one card from your vanguards soul to the drop zone) if you do, you choose one of your rear-guards, return it to you hand, then search your deck for up to one card with the same name as that unit, reveal it to your opponent, and then put it into your hand. Once you do you shuffle your deck and choose a card from your hand and soul charge it.
Now as complicated as this effect may seem it’s yet another combo that can be easily remembered. It has a little bit more set up than The PRISM Bermuda’s do but the effects in the long run tend to be more beneficial to the player. The play would be Ride the break ride Meer first then next turn break ride into the new Meer unit. Then you will be able to start combing off plays that will end with you having large columns to attack with. Partner the New Harmony ability and units with on call effects, and this deck can easily be a top Tier deck. However it is not for the inexperienced player. The Duo builds require a lot of field set up and though out plays. But if you take the time to work through each cards effect and learn the combos that the deck can make. You will be able to take over the field and put out the big numbers that can stop any deck in its tracks and send it turtling.
This will conclude part one of the two part series. In the next article I will go more in depth into the combo plays as well as present two different builds that include the new Bermuda support. So until next time I’m Scotch Janesek and keep on keeping on. Also always remember to read your cards before you play them. 99 Percent of all Issues can be solved by just reading your cards