The mighty warriors of the sea

You are here: Home / The mighty warriors of the sea
Categories: Cardfight Vanguard
by Johnathan Luu

Before I begin, I feel I should tell you guys a little about myself. I'm Johnathan Luu. I have been playing Cardfight!! Vanguard since the official release of the first trial decks for Royal Paladins and Kagero back in 2011. I am a judge for Cardfight!! Vanguard having several judging experiences such as this year's Stand Up Cup National Championship and the Team League competition in Orlando, Fl. I'm also the current Atlanta Regional Qualifier Champion and one of a possible 36 contestants participating in this year's North America World Championship Qualifiers.

With the release of Set 11: Seal dragons unleashed, many clans have been given a major upgrade. One such clan is Aqua Force. With nineteen new cards in the set there has to be some that make Aqua Force deadlier than before right? well there is and it's name is Blue Flight Dragon, Trans-core Dragon. 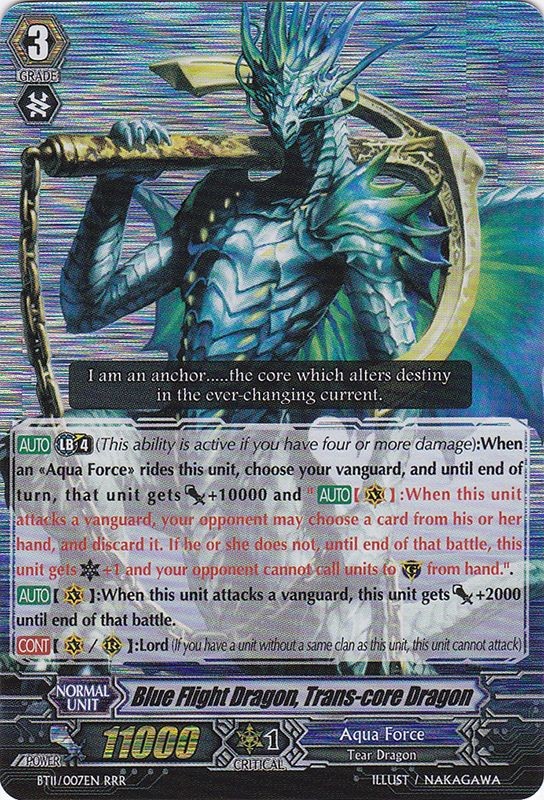 Blue Flight Dragon, Trans-core Dragon or Trans-core for short now is the first official release break ride unit for Aqua Force. Break rides have the unique mechanic that when another unit of the same clan rides over themselves at four damage gives the new vanguard increased power and effects. Trans-core in particular has two effects when a unit is ridden over himself. First is the most commonly seen effect which gives 10000+ power to the vanguard most break rides have. The second is what makes Trans-core so dangerous. When the unit that rode over Trans-core declares an attack, then gain the unique ability that states "When this unit attacks a vanguard, your opponent may choose a card from his or her hand, and discard it. If your he or she does not, until end of that battle, this unit gets [Critical]+1, and your opponent cannot call units to (GC) from hand." The effect alone is potentially deadly mid game but end game crushing towards the later turns.  But Trans-core alone can't be that bad right? He's only as good as the unit that rides over him so as long as you can deal with the new vanguard, you're fine right? Well, I did say there were nineteen new units in the set.. 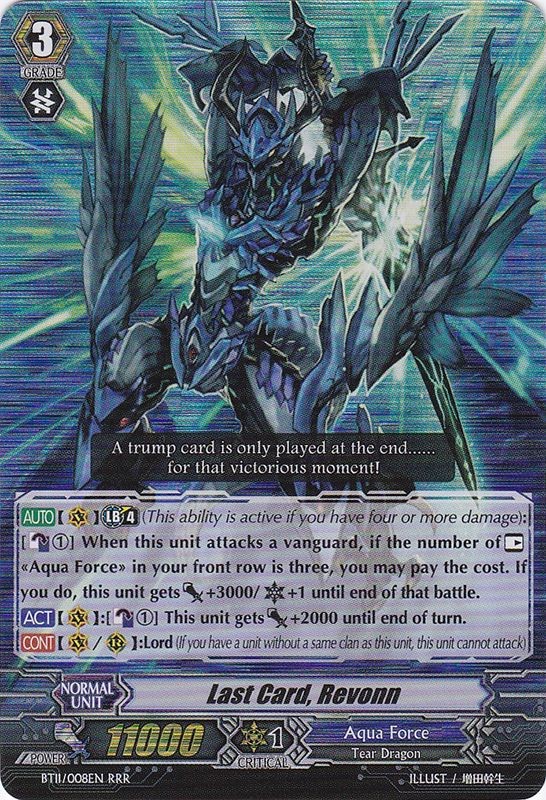 And here's one of them, Last Card, Revonn. One of the newest grade 3 units to be released in English for Aqua Force and one of the more aggressive cards for the clan. His own limit break effect allows him to gain an extra critical and 3000+ power for the cost of one counterblast is the idea of insane. In a clan that is typically known to run anywhere from 4-12 stands (or 16 if you wish to play mass production sailor) allows added pressure by giving the vanguard an extra critical without having the need to run critical triggers forcing your opponent to deal with the two damage or guard the attack and then be wide open or lose more cards if you get stand triggers attacking again. The extra 3000+ power is nothing to laugh at either since having a minimum of a 7000 booster allows Revonn to hit 21k, a perfect number against 11000 vanguards. With break rides gaining momentum, 21000 attack columns are going to be a heavily looked at consideration when it comes to deck building. Now pair up Trans-core with a newly ridden Revonn and you have a minimum 24000 attack column with the potential to do three damage alone before triggers. That forces a minimum of three cards from your opponent to guard one attack. One for the discard cost of Trans-core ability that was given to Revonn, and then the minimum amount of cards needed to block Revonn's own attack with either a combination of a perfect shield and a discarded card or a 10000 and 5000 shield with a one trigger to pass scenario. A minus three or take three damage scenario is something no one wants to face.

The Last Aqua Force grade 3 unit from this set that I want to mention particularly is Thundering Ripple, Genovious 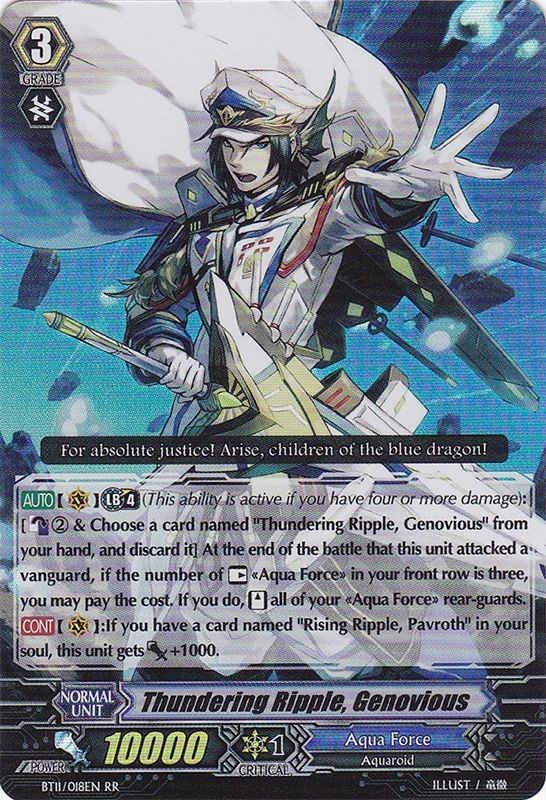 Genovious is the first persona blast unit in Aqua Force. His effect states "[Counter Blast (2) & Choose a card named "Thundering Ripple, Genovious" from your hand, and discard it] At end of the battle that this unit attacked a vanguard, if the number of [Rest] «Aqua Force» in your front row is three, you may pay the cost. If you do, [Stand] all of your «Aqua Force» rear-guards." With Genovious, it allows Aqua Force players to play an entirely different set of trigger line up. With the usual being mostly stands, it allows them to play mostly criticals with Genovious ability to stand all your Aqua Force rear-guards allowing for full powered attack columns with extra critical potential. The best part is that Genovious doesn't even have to hit! As long as you declared an attack with Genovious as your vanguard to your opponent's vanguard, you can activate and pay for the effect. With the combination of Trans-core and Genovious, it means Genovious can attack for 20000 (or 21000 if you have rising ripple, pavroth in your soul) alone forcing your opponent in a similar situation if he was being attacked by Revonn but instead of a consistent extra critical from Revonn, your opponent faces the restanding of your entire rear-guard columns.

The last card I want to mention that goes great in combination with Trans-core isn't a new card from Set 11 but is still feared by many.  Blue Storm Supreme Dragon, Glory Maelstrom 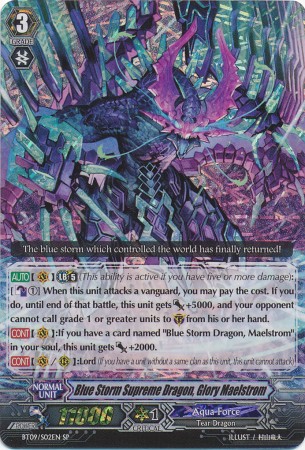 While unlike the other units I talked about, Glory Maelstrom is a limit break five unit. while not going off as early or as often as the other units, his effect more than makes up the difference. With Glory Maelstrom, when he declared an attack to the opponent's vanguard at five damage, his ultimate break effect kicks in. At the measly cost of one counter blast, Glory Maelstrom gains 5000+ attack power and your opponent isn't allowed to call units grade 1 or higher from their hand to guard the attack. That means no perfect guards. Only grade 0 from the hand and grade 2 units from the field may be used to guard the attack. When you pair this with the effect of Trans-core, the game is practically over for your opponent. Your opponent is force to discard one card automatically for Trans-core's effect unless they want you to gain a extra critical and take the attack to the face. then with the +10000 given to Glory as well as Glory's own effect to gain +5000, Glory Maelstrom is attacking for 26000 unboosted forcing a minimum of two 10000 power shields to allow one trigger to pass for the attack to go through.

With the new cards from Set 11 Seal Dragons Unleashed, Aqua Force is not something to be put off to dry.

I have been playing Cardfight!! Vanguard since the official release of the first trial decks for Royal Paladins and Kagero back in 2011. I am a judge for Cardfight!! Vanguard having several judging experiences such as this year's Stand Up Cup National Championship and the Team League competition in Orlando, Fl. I'm also the 2013 Atlanta Regional Qualifier Champion and one of 36 total contestants participating in this year's North America World Championship Qualifiers.

Breaking Away From The Meta: Mono-Darkness Kalima
Break Rides! Pros, Cons, and Their Impact on The Meta
Our Contributors