Hello everyone! I’m back from Nationals feeling completely disappointed in myself, but I am ready to work hard and improve my game for the upcoming Yugioh season. While I was at Nationals I spoke with my good friend Scott Page on Thursday night about what decks we both expected to see at this event. As we listed decks, Scott mentioned Ritual Beasts would be popular, as they are on Dueling Network. I was reluctant to believe this notion, but I remained open minded and sure enough multiple Ritual Beast decks topped this event. Not only that, a decent amount of the field at Nationals was actually Ritual Beasts! The biggest issue that people have with this deck is that they do not actually know what it does. Everyone knows the simplest thing, in that Ritual Beasts can only be special summoned once per turn. Outside of that fact, there seems to be a whole lot of confusion that this deck creates. 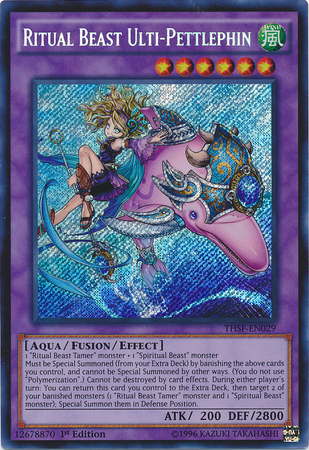 When the Secret Forces first came out, many players splurged on box after box of this set in search for the powerful Nekroz cards. For every failed box there was probably enough cards to construct a Ritual Beast deck, which at the time wasn’t what people wanted. Players wanted to pull a Nekroz of Brionac, not a Pink Dolphin (Shoutout to Denny Yu)! The first weekend of The Secret Force’s release Nekroz dominated the playing field, but Ritual Beasts all managed to claim a few top spots and for good reason. When your opponent has to read every card you’re playing, you can very easily win due to his or her own ignorance. This became very apparent with Ritual Beasts. At the Columbus regional in February there was a Ritual Beast player that started 5-0, and Jeff and I were very skeptical because we both were sold on Nekroz. Jeff said that the guy was probably cheating his opponents and using the monster’s effects multiple times a turn, and I didn’t really know what to think so I remained silent. Jeff evidently was paired against this guy the following round, and sure enough the guy tried to cheat Jeff and special summon his Ritual Beast monster multiple times a turn! Luckily Jeff was quite aware of the capabilities of this Ritual Beast deck and he knew what to expect. Months after The Secret Forces release, a large sum of players are still struggling to understand just what Ritual Beasts do. I had a very miniscule understanding, which prompted me to contact my new friend Miguel Soto about Ritual Beasts.

Miguel and I played at YCS Columbus and he was my only loss in swiss believe it or not! I got absolutely slaughtered by his Ritual Beast deck and I had no idea how to stop it. After the match he mentioned that I could have used Artifact Lancea and I kicked myself for not realizing that while I side decked. I wished him the best of luck as I was certain he would top that event. My first round on day two, I played against his friend playing the same deck. At that point I felt a bit more comfortable against the deck and managed to defeat my opponent. Fast forward to Nationals this year I ran into Miguel again and he was tearing up the swiss portion of the event with his favorite deck, Ritual Beasts! After seeing Miguel run through his opponent’s with the deck and make it all the way to Top four at Nationals I wanted to learn everything I could about Ritual Beasts and help the rest of the community better understand this deck. I asked Miguel quite a few questions and he responded with a very lengthy document of information to which I will relay to you all!

What Exactly Are Ritual Beasts? 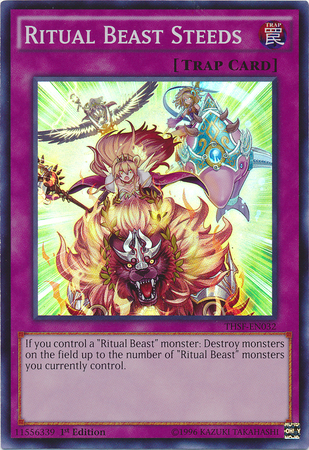 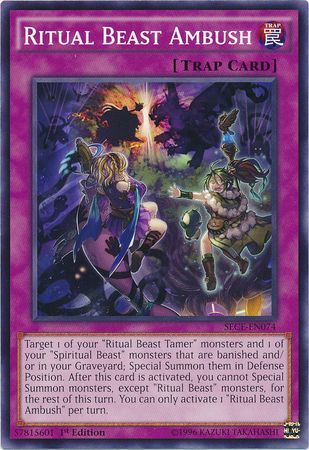 Most players immediately pick up and read at least one of the many Ritual Beast monsters as the match progresses, which is definitely not ideal. Lets take a look at the many monsters in this deck and understand what they do, shall we?

I had the pleasure of talking with Miguel Soto and having him explain some of the combos of the deck and where they should end you when you perform them. Miguel explained to me that there are four very optimal opening plays that Ritual Beasts have. Miguel says the most basic combo of the deck involves Elder and Cannahawk. Soto told me that Elder and Cannahawk would convert into two searches, which should always be a Steeds and an Ambush. It’s important to know that competent Ritual Beast players will always ensure that they end their turn with an Ambush at their disposal. This means that if they search two copies of Ritual Beast Steeds, you should be able to read that they have an Ambush already. The second optimal opening is Elder, Rampengu, and Dimensional Fissure because it allows you to search three cards and have Dimensional Fissure face-up on the field! Miguel says that after the Elder/Rampengu/Dimensional Fissure combo your ending field should be an Ulti-Cannahawk, Dimensional Fisure, Steeds, Ambush, and whatever card you choose to search third. The third and fourth ideal openings are Elder/Rampengu/Soul Charge and Elder/Cannahawk/Emergency Teleport, says Soto.

The Ratio of Tamers Explained by Miguel Soto

According to Miguel, a lot of players struggle with uncovering the perfect sense of balance amongst the Tamers in Ritual Beast deck.

“What is the perfect number?”

Soto explains that the perfect ratio should be:

Soto explained that while Wen is the strongest Tamer she is the worst in the early game, which is the most important portion of the game for a Ritual Beast player. Knowing this, Soto wanted to maximize cards that would enhance his early game, which lead him to the conclusion of running two copies of Lara and three copies of Elder.

Ritual Beasts are not unbeatable, and a lot of players are already using the cards that put this deck out of its misery, it’s just a matter of knowing what is effective. “The biggest fear of a Ritual Beast player is the card Denko Sekka along with Maxx “C” and Artifact Lancea,” says Soto. Denko Sekka can outright win you the game against Ritual Beasts because they are so reliant on their plethora of backrow to score them the victory. The hand traps, Maxx “C” and Lancea, are the most effective against Ritual Beasts because there really isn’t a solid way of playing around these cards, whereas Denko can be halted by Solemn Warning and Chaos Trap Hole. Soto suggested using Debunk to counter these hand traps, and he also found it to be applicable when playing against Burning Abyss, Shaddoll, Nekroz, and the hands. Miguel mentioned that massive field removal is another great fear of his if he can’t easily replenish his field. Cards like Fire Lake, Dark Hole, Torrential Tribute, Raigeki, and Mirror Force are the best ways to stun a Ritual Beast player, explains Soto. The Circuit Series stops by Charlotte next, will you be prepared for Ritual Beasts? Will you pilot this intriguing deck and make a run for the top cut? I strongly encourage you to give this deck a try, as I enjoyed playing something different from Nekroz while I tested it out. I would like to extend a huge thank you to Miguel Soto for helping me better comprehend Ritual Beasts, and I wish him the best of luck at the World Championship in Kyoto! Until next time Duelists, Play Hard or Go Home!