You are here: Home / Upping Your Game: Plunging into Large Events
Categories: Kaijudo
by David Pendergrass

Hello fellow Kaijudo duelists! My name is Dave Pendergrass, or as some of you may know me around different forums, Drizer.  I was originally hesitant to enter ARG’s article competition, simply due to the fact of time constraints and the abundance of talented authors also participating.  After seeing many of the submissions, I decided the topic I had been thinking of would fit perfectly into those other articles: What to Expect at Large Events.  Many of the authors submitting articles focused on taking the best decks of the meta and analyzing them (my favorite was Aiden Thorne’s), but decks aren’t the only aspect to take into consideration when considering large events.

For many people, this is the first return to the Trading Card world since the demise of Duel Masters.  After the announcement of Organized Play for Kaijudo, I quickly thought to myself, “I wonder what these events are going to be like?”  While I cannot answer that question to a “T” just yet, I can provide background knowledge on prior experiences.

The first subject I want to touch upon is deckbuilding.  If you are wandering over from the Yu-Gi-Oh! section of Alter Reality Games, the first thing I will tell you is that there is no use of a sideboard in Kaijudo, you are stuck with the same cards that you put in your main deck.  With that being said, it is of the utmost importance you make every card count.  While some cards such as Comet Missile might be great against a Cobalt Control deck that is running Star Lanterns and Grand Gures, it is going to be terrible against an opponent running a rush deck and to a lesser extent, aggro.  Certain cards, often referred to as “techs”  are strong against a particularly popular deck that is being run in the meta.  I won’t get into what is popular in the meta at this point because so many articles have already been written about it, but there are cards that are particularly strong against a certain match-up and not so great against others.  Another card that could be considered a “tech” is a card like Crimson Wyvern, who will destroy all blockers on your opponent’s side of the field. 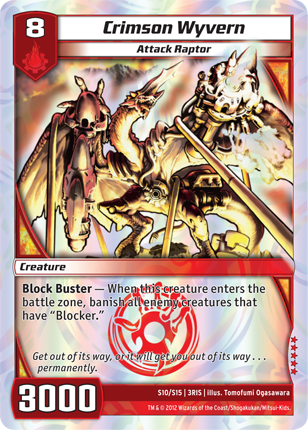 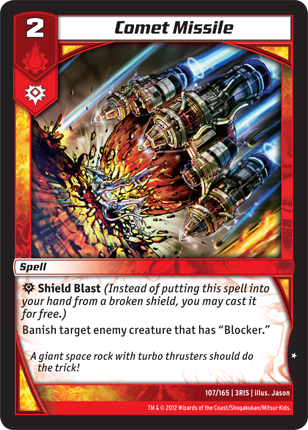 The talk of techs raises my next question, what do you run at a large event?  While I am not going to name specific deck types, you as a player have a few options.  First, you are able to run the standard build that you have seen performing well throughout different areas across the US.  Your next option is to run an “Anti-Meta” deck, or one that basically guesses what the meta will be playing, and is specifically designed to counter that matchup.  You also have the option to run something completely weird that nobody has seen before and has the chance to have it take the entire competition by storm.  The most risky of the deck choices I’d say is the Anti-Meta deck.  If you choose to commit yourself to a deck that plays great against the archetype as it is often referred as, you have a very limited scope and have a higher potential to lose to decks that stray from the archetype.  The one thing to consider though is with high risk comes high reward, and if everyone in fact does that play the deck type you built against, you have the potential to wipe out everything in your path, but often times I have not found it to be a successful strategy.  The next riskiest deck to play is the one that is so far out there, that nobody has seen it played before.  I admit, in my local tournaments, people often try decks out that I have not seen posted anywhere among many different forums, and they win.  This is often due to me not really knowing how to play against them, and that certain unpredictability factor.  These kinds of decks have massive potential.  Drawing from Duel Masters a bit, the first Continental (National) Championships were won with a deck that was long thought to be dead.  Who knows, maybe history can repeat itself.  Finally, we have the archetype.  These are the least risky decks that you have access to, due in part because if they weren’t winning, you probably wouldn’t see multiple different builds of a similar deck.  While no deck is an auto-win, sometimes playing a riskier deck can benefit you with high rewards.  The best advice I can give any of you reading this is playing a deck that fits your play-style.  In fact, I thought the topic was so important that about seven years ago I wrote an entire dedicated Duel Masters article about the subject.  While you can find basic builds throughout the multiple sources you have available to you, play style varies from player-to-player and you essentially must pick the best deck that fits your own unique play style, whatever that may be.

The next aspect of large events that I wanted to touch upon was the physical environment of the tournament.  With the exception of the Texas crew, most people probably have chosen a home store and stayed there throughout the time they have played.  While this does grow a community and bring them together, it also gives you a disadvantage because you are not familiar with other stores.  I don’t know about anyone else, but whenever I enter a new store there is definitely a sense of nervousness, because I don’t really know what to expect.  I am the type of person that likes to know their surroundings, as well as have an idea of what the player base is running.  Knowing what your opponent is playing at a certain time can definitely be beneficial, but knowing your opponent’s play style is what you really want to learn.  If you are able to distinguish a player as aggressive/conservative before you even play them, you are at a distinct advantage over them.

You read the previous statements that I have made, so you arrive at your tournament center with the deck that works for you, you looked around the internet and the store itself to see if there were any techs to consider, and you built a deck that works for you.  What’s next?  First, make sure you start the day with a fresh pair of sleeves.  I would normally stick with a brand you are familiar with, as sleeves can behave in different ways in terms of gloss, texture, slipperiness.  My suggestion is to switch out your sleeves when you first get to the venue and then play a few games with them to “break them in.”  This will help ensure that you don’t get any un-needed game losses for marked sleeves or the like. (My favorite sleeves are pictured below - you can pick them up at the ARG store!)  I would also suggest bringing the new sleeves that you plan on using with you, and don’t plan on purchasing the sleeves at the store.  This is crucial because shops can run out of the sleeves you like or worse, not even carry them.  I know it sounds a bit far-fetched, but it is always better to be prepared.  Also make sure to bring extra dice and any cards that you think you are considering running for your deck. Finally, the best advice I can ever give: don’t be nervous.  Nervousness is only going to hinder your game, so your best strategy going to a KMC is going with a group of friends.  When playing against new people, try to keep your mind relaxed and don’t put un-needed pressure on yourself.  Try to keep everything as casual as possible, just like you were playing a close friend at a local tournament.

As a few final thoughts, I’d like to give you the rundown of what I normally bring to any event to set me up for success:

That’s about all I have to say on preparing for big events! I hope everyone enjoyed hearing my thoughts on the subject, and I hope to be writing more articles in the future. Please feel free to leave any comments that you may have for me either here, or on my YouTube Channel (iDrizeri). Thanks for reading!

Granblue: A dead clan?
FOR JUSTICE!!!
Our Contributors