Welcome to the start of another series here on ARG: Whatwoojudo!

The aim of this column is to get players talking about key turns that can arise in certain matchups. I'll present a hypothetical board state, and a little background as to how the game progressed to that point. I'll then display Player A's hand, and the goal will be to determine the optimal line of play on the current turn.

After each situation is put on display, I'll highlight the important factors to consider when deciding on your move. At this point, I encourage you to think about what you would do before proceeding onward.

At the end, I'll reach out to other players in the community to get insight into what they would have done, and they'll present their reasoning here. Their take may differ from mine or yours! If you feel differently, please make yourself heard in the comments!

Remember: Kaijudo, like all TCGs, is a game of incomplete information. We can't always make the "right play," but if we correctly weigh all the known variables, we can always make the "optimal play" -- that is, the play that will lead to success the highest percentage of the time. Whatwoojudo challenges you to find the optimal play!

Let's get started! Our first scenario is a very simple board state.

You're Player A. You're on the play in this game.

You find yourself with a bit of a top-heavy opening, and no Fire Birds.

You mana Stormspark and end. The next turn you draw [ccProd]Shadeblaze the Corruptor[/ccProd], plop him into the mana zone, and end. Player B manages to summon an [ccProd]Aqua Strider[/ccProd] on turn 2.

You unlock Darkness on your fourth turn, and you draw [ccProd]Tatsurion the Unchained[/ccProd], but you opt not to attack a shield with [ccProd]Lux[/ccProd], since your hand is devoid of any level 5 or 6 Dragons (so you won't have follow-up pressure, barring topdecks). You also want to keep [ccProd]Lux[/ccProd] around as long as possible, hoping your opponent hasn't drawn into a [ccProd]Bone Blades[/ccProd].

You're running about 20 dragons, with no shortage of options at level 6 or less, and you have Tatsurion lying in wait. Your opponent casts [ccProd]Crystal Memory[/ccProd] on turn 4.

On turn 5, you rip a [ccProd]Hyperspeed Dragon[/ccProd], and summon it. You have to mana your [ccProd]Infernus the Awakened[/ccProd]. Knowing you have the potential to summon Tatsurion on the next turn if [ccProd]Lux[/ccProd] survives, you once again pass without attacking.

Take all this information into account. Now ask yourself, whatwoojudo? 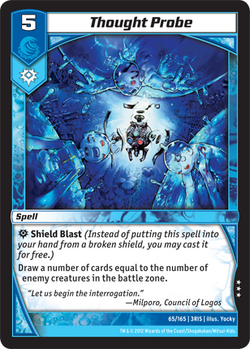 Thought it through? Pretty straightforward, right?

In my opinion, the sequence of events outlined above screams for Player A to take an aggressive role. Your setup has been disrupted, and living off the top of your deck is dangerous against your opponent's presumably superior late game. I've seen many players face this situation and play conservatively, though. Is the aggressive approach here measurably better than standing pat?

"Man, you really screwed me here (laughs). Missing [ccProd]Nix[/ccProd] and getting [ccProd]Mesmerize[/ccProd]d when you're on the play is brutal, and you don't have any large Dragons or a Herald to give you hope. You're pretty much in the abyss.

This is a classic example of knowing your role. On one hand, you could play the Lyra without charging mana and then beat over the Strider with Hyperspeed, but you're ultimately not getting much closer to winning. Meanwhile your opponent (a) has a [ccProd]Mesmerize[/ccProd] for your Unchained in hand, (b) can continue to drop mana and build up to his superior late game curve, and (c) obviously Memoried for something useful (Lyra/Storm/Andromeda). It's pointless to row the Tatsurion in this case since you're going to be living off the top of the deck with 6 mana, making all your finishers dead draws in the next few turns. You can't afford to just toss away a Double Breaker and hope to draw more that you can actually summon in the next two to three turns.

Summoning Tatsurion with fast attack is the play here in my mind. He can banish the Strider and give your team a shot at your opponent's shields.

You're so far behind that you are going to lose regardless if your opponent is blessed with multiple relevant shield blasts in addition to this setup, meaning your likely best chance at victory is to seize this opening to bullrush him. If these breaks get through successfully, your opponent is in a terrible position. Considering how bad it looks right now, I'll take that chance.

While Lyra is the safer play in the short term, you have to remember all the tricks your opponent can have in hand with this much advantage. Summoning Tatsurion makes something like [ccProd]Mana Storm[/ccProd] and [ccProd]Mesmerize[/ccProd] much less scary; unless they have backbreaking shield blasts that can deal with both of your Armored Dragons, there's no way they can do a play on their turn 6 that doesn't answer your creatures.

What if you play Lyra and your opponent has something like [ccProd]Mesmerize[/ccProd] and [ccProd]Fullmetal Lemon[/ccProd]? You're in a bad way. You are probably hoping, if you play the Lyra, that they match you with one of their own. Then you can play Tatsurion next turn and go in. But even then, you're subjected to the same risk of shield blasts, and you've crept one turn closer to Andromeda while only gaining one Double Breaker that can easily be dispatched next turn if they double KO with their Lyra.

Either way, to win you have to hope to dodge high impact shields, and it is unlikely that you will considering how much of their deck you have already seen ([ccProd]Root Trap[/ccProd], [ccProd]Terror Pit[/ccProd], [ccProd]Piercing Judgment[/ccProd], [ccProd]Grip of Despair[/ccProd], and of course [ccProd]Bottle of Wishes[/ccProd] among potential others). Considering this, you should attack with [ccProd]Lux[/ccProd] first, lessening your chance at hitting a high impact shield blast (or maybe getting a [ccProd]Terror Pit[/ccProd] out of the way while still getting value out of [ccProd]Lux[/ccProd]). Then get your two breaks with Unchained and continue with [ccProd]Hyperspeed Dragon[/ccProd] if you are lucky. You might think you should leave Hyperspeed untapped if you managed to dodge bullets with your other two creatures, but considering your opponent plays [ccProd]Stormspark Blast[/ccProd] and [ccProd]Piercing Judgment[/ccProd], you want to uncover them as soon as possible, so there's little reason not to continue attacking.

I'm not going to spend time running down every possible outcome, but let's say your Unchained breaks a Piercing. Bouncing the Unchained and tapping the Hyperspeed is probably their best option, since they can attack over [ccProd]Lux[/ccProd] with [ccProd]Keeper of Dawn[/ccProd] and then if you draw a multiciv card, you can't re-summon Tatsurion. If you can re-summon him, though, that's not even that bad for you, since you can clear out the Dawn and then go for game on your turn 7.

What if [ccProd]Tatsurion the Unchained[/ccProd] hits a [ccProd]Root Trap[/ccProd]? Your opponent is probably going to want to get rid of the Double Breaker, but now you're at 7 mana and can potentially rip another Armored Dragon. They can Trap the Hyperspeed and then attack over your [ccProd]Lux[/ccProd], but Unchained can then kill the Dawn, untap, and break the last shields. It's an uphill battle, but it isn't unwinnable. Of course, if they hit pretty much anything on the initial [ccProd]Lux[/ccProd] attack, you're done. But the fact remains that if you can threaten to put them at 1 shield while they're still on 5 mana, that should hopefully be enough to effectively end the game. Topdecking while your opponent methodically curves into Andromeda and beyond is a sure recipe for a loss, so you might as well try your hand."

In this first scenario, Tyler and I came to the same conclusion. Is this the same one you reached? Do you think the suggested line of play above is wrong? Make yourself heard in the comments below!

Find yourself encountering a dicey situation and you're not sure what the best play is? Snap a photo of the board state and your hand, or send a small write-up to thekaijudist (at) gmail (dot) com! I'll feature any submissions I get in future installments of this series. Each time, I'll be back with a fresh take from another player.

The goal of this series is to invite discussion, encourage participation, and maybe even be a little controversial. Submit your scenario and you could be featured in the next Whatwoojudo?

The World As I See It
Deck Doctor #19: Gishki and Constellar
Our Contributors